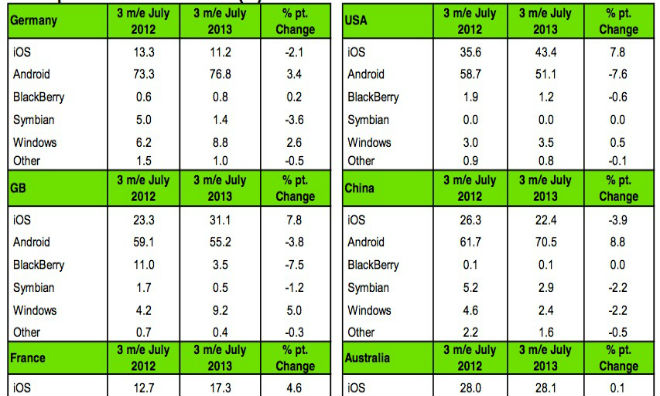 Continued good news for Apple in the United States. The iPhone has more than 43 percent of the domestic market, marking a 7.8 percent jump over the July quarter of 2012. The increase appears to be largely at the expense of Android, which saw its share of the U.S. market fall during the period.

Additionally, although the market share of iOS declined throughout much of Europe, the iPhone in Great Britain saw a 7.8 percent jump between the three-month period of 2012 and 2013, according to an analytics firm…

According to Kantar Worldpanel Comtech, the iPhone had 43.4 percent of the US smartphone market during the three month period ended in July. That was up from 35.6 percent from the same quarter in 2012, for a 7.8 percent increase. Meanwhile, Android’s share of the US market fell to 51.1 percent, down from 58.7 percent during the same period a year ago, for a 7.6 percent drop.

Apple also saw gains in Great Britain, France and Mexico, according to the research firm. The UK and France represent two of the five big European market, the remainder held by Android. In the US, Apple and Android combined account for 94.5 percent of smartphone sales, according to Kantar.

Globally, Apple and Android continue to dominate sales, but there are interesting regional patterns emerging. Android is far stronger across the major European markets and China where it accounted for around 70% of smartphone sales during the past quarter.

However, while the two currently dominate the smartphone picture, to maintain control, they will need to remain focused on their two key markets.

“Apple and Android must focus on a balance between retaining existing customers and attracting featurephone owners to trade up if they want to continue their success over the next year,” said Dominic Sunnebo, strategic insight director at Kantar Worldpanel ComTech.

Kantar emphasized the important role featurephones will be to the growth of smartphones, representing more than half of all mobile owners. To emphasize the point, the group noted the success of the Windows Phone.

Some 42 percent of sales the Lumia 520 are coming from feature phone owners upgrading to a smartphone. By comparison, Apple and Android attract about 27 percent of feature phones. In other words, Windows Phone’s gains are not coming at the expense of Apple or Android.

“The Lumia 520 is hitting a sweet spot, offering the price and quality that new smartphone buyers are looking for,” said Sunnebo. For the first time, the Windows Phone platform has risen to No. 2 spot in a major market, grabbing 11.6 percent in Mexico.