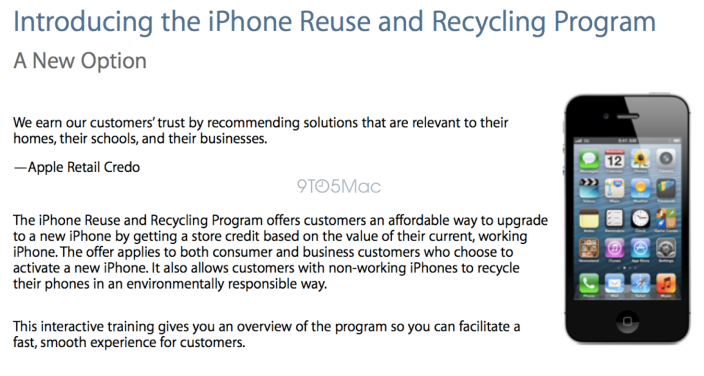 Despite Tim Cook dodging questions about the then-supposed iPhone trade-in program during June’s earnings call, the rumors have turned out true after all.

Apple on Friday officially launched the new iPhone Reuse and Recycling Program, basically a trade-in initiative aimed at boosting iPhone sales at Apple’s own retail stores, which currently comprise only twenty percent of iPhones sold (Cook wants to sell half of all iPhones at company stores).

The CNBC story quotes NPD Group VP Eddie Hold who called trade-in programs for smartphones “the biggest, hottest area of smartphone transactions this year,” even with an NPD-estimated thirteen percent of smartphone users taking advantage of these offers.

In addition to helping support the environment, customers will be able to receive a credit for their returned phone that they can use toward the purchase of a new iPhone.

The move couldn’t have come at a better time: in less than two weeks, Apple is expected to launch the iPhone 5S/5C so would-be buyers should be incentivized to buy their new handset from an Apple Store.

Mark Gurman of 9to5Mac was able to get hold of Apple’s internal communication to retail employees:

The iPhone Reuse and Recycling Program offers customers an affordable way to upgrade to a new iPhone by getting a store credit based on the value of their current, working iPhone.

The offer applies to both consumers and business customers who choose to activate a new iPhone. It also allows customers with non-working iPhones to recycle their phones in an environmentally responsible way.

Basically an extension of Apple’s existing online-only Reuse and Recycling Program, the new iPhone trade-in process is handled by store employees, via their EasyPay devices.

After you turn in your existing handset, you’ll receive a gift card which must be immediately used toward the purchase of a new iPhone. Unfortunately, you can’t use the gift card against the purchase of accessories or other Apple products.

Under the terms of the initiative, eligible devices include the iPhone 3G/3GS/4/4S/5.

@flargh @jyarow “The device has to power on, and the customer has to be under contract” http://t.co/eTjN6mERgx

Upon purchasing your new device and activating it on a contract, the system will determine your old device’s trade-in value, which is usually dependent on a myriad of factors such as model, capacity, and the physical condition, including the state of its screen, hardware buttons and any possible physical/liquid damage.

Apple partnered on the iPhone Reuse and Recycling Program with the recycling firm BrightStar so it doesn’t really determine the trade-in value of your handset, BrightStar does.

So, how does Apple’s initiative compared to others?

The iPhone trade-in values will consistently fluctuate based on supply and demand, but we’re currently hearing an average of about a $250-$253 value for a 16GB iPhone 5 in good condition.

The highest amount Apple will pay for a used iPhone, according to WSJ: $280.

Gazelle appears to be offering a better deal than Apple does.

For example, a flawless 16GB AT&T iPhone 5 gets a locked-in price of $330, while a 16GB Verizon iPhone 4S in perfect shape fetches $185. Unlocked iPhones command even higher trade-in value. 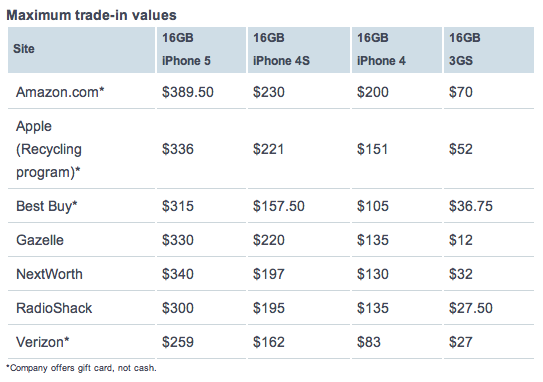 Gazelle will accept any iPhone, except for the iPhone 3G released in 2007, and is guaranteeing these prices until October 10.

As for Apple’s program, I was surprised to learn that business customers are eligible.

With the iPhones ruling the business world now, this will help ensure business customers get the best value of their deployed handsets and at the same time incentivize them to stay in the Apple ecosystem.

All told, that’s a pretty smart move as Apple requires you to come in at a store. As such, the iPhone trade-in program will drive traffic and upgrades to new phones.

Is it in fact a great program for consumers or just for Apple?