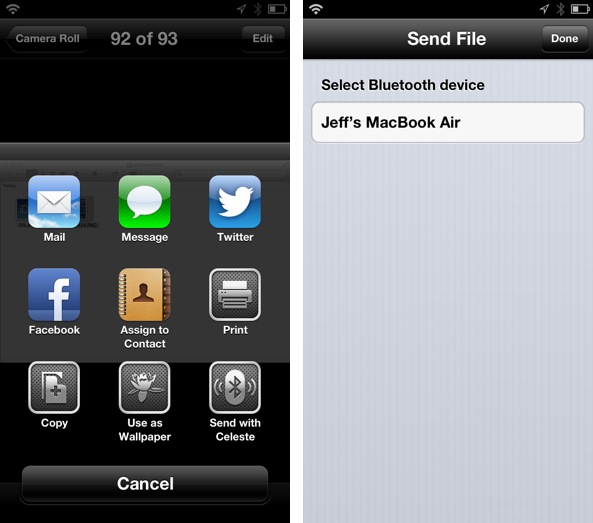 The CocoaNuts’ original release of Celeste went down as one of the most hyped jailbreak apps in the history of jailbreaking. The fanfare of the release seem to rival some of the more prominent apps to appear on the App Store at the time.

I remember waiting up until 3:00 AM in anticipation of Celeste. It never lived up to the astronomical amount of hype it generated, but it was a decent app, if not a little buggy and complicated to use.

The sequel to Celeste, simply entitled Celeste 2, is a vast improvement over its predecessor. Whereas the original Celeste never quite lived up to its claim to bring simple Bluetooth sharing to iOS, Celeste 2, for the most part, just works.

The purpose of the app is to allow users to transfer files between compatible Bluetooth devices. These devices can include a fellow iOS device such as an iPhone, iPod touch, or iPad. It can also include Macs, and even Windows machines. Generally speaking, if the device supports Bluetooth file transfer, then chances are your iOS device can talk to it by means of Celeste.

Want to see Celeste 2 in action? Have a look inside at our full video walkthrough after the break…

Once you install Celeste, you’ll notice a new app icon on your Home screen. This app contains all of the configuration options needed to get Celeste working properly. There are basically two options that you can configure via the app: Show app on receive, and Import with Gremlin.

The show app on receive option essentially forces the Celeste.app to open on incoming file transfers. This is handy because the app provides you with a percentage status while the transfer is in progress. 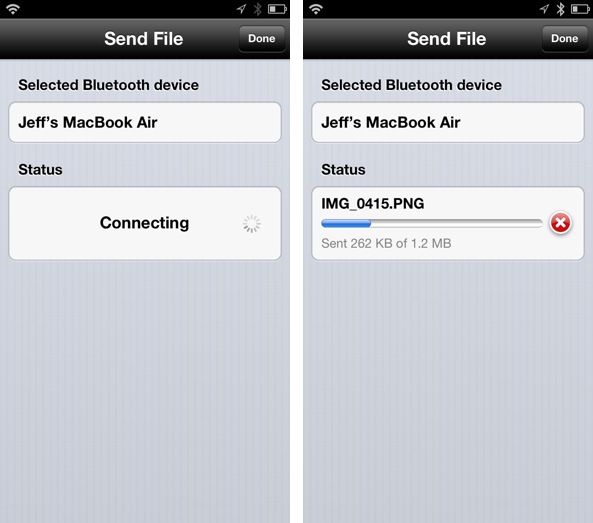 The second option, Import with Gremlin, is an option that, in theory, allows one to control how files are imported into the apps on your device. With Gremlin import disabled, files will be stored in the /var/mobile/Received/ folder, which is only accessible when using something like iFile. Gremlin allows you to bypass the need to venture into the file structure of your iPhone, and instead will import received files directly into their respective apps.

Unfortunately, I found the Gremlin import option to be inconsistent at best. With the toggle set to the off position, Music files were still automatically imported into the stock Music app. I also found that video files were not imported, regardless of how the toggle was set. Speaking with CocoaNuts reps, they acknowledge that this is a problem and are working on a fix in the next update.

Despite that main flaw, Celeste works well for Bluetooth transfers. Both up and downstream file transfers worked 99% of the time between my MacBook Air and my iPod touch. I could easily send files to and fro between the two devices. 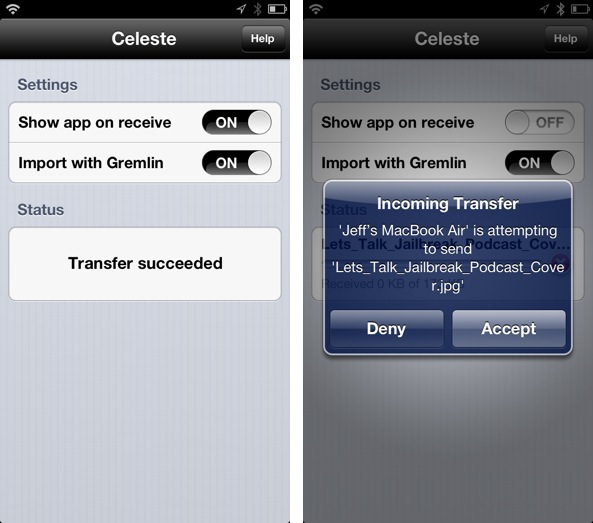 The best part of Celeste 2 is its slick integration with a variety of different apps. It works almost like a built in stock feature in iOS. You can share files from a variety of different apps, including Photos, Notes, Music, iBooks, Contacts, Safari, Dropbox, and more. The send dialogue is tightly integrated within each app’s “sharing” option, making for a fairly consistent experience across the board.

I should also mention that a large part of the Celeste 2 upgrade is the fact that the app now uses the iOS Bluetooth stack. This means that users can continue to stream music over Bluetooth while simultaneously transferring files. For someone like me, who often streams music via Bluetooth, this is a big deal.

As far as simple Bluetooth file transfers go on iOS 6, Celeste is a solid option. It’s a bit flawed when it comes to what happens after the files are received, but getting the files to your device or from your device works just as you would expect. If the CocoaNuts can tighten up the Gremlin integration, then this is an app that I can wholeheartedly recommend.

At $6.99 for the next few weeks, you may decide that it’s best to jump now. After 9/15, the app will go up in price to $9.99. Yes, there are other Bluetooth options out there like AirBlue Sharing, but Celeste is perhaps the easiest and most straightforward method for sending and receiving Bluetooth file transfers. What do you think? Share your comments down below.

Note: Celeste 2 is a free upgrade for previous Celeste owners.