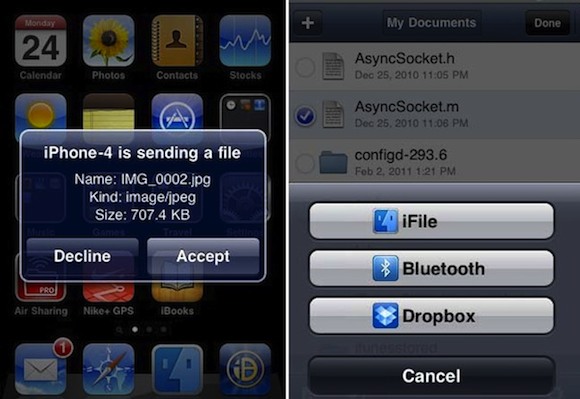 The ability to transfer files from iOS to other devices via Bluetooth is a glaring omission from Apple’s mobile products. The jailbreak community has made up for that a bit, with utilities like Celeste. But options are still limited.

That’s why we were excited to see AirBlue Sharing pop up in Cydia over the weekend. The full-featured app allows you to share files from your iOS 5 device, with almost any other Bluetooth-enabled device, with just a few taps…

When we say full-featured, we’re not joking. Here’s a list of AirBlue Sharing’s capibilities:

At $4.99, AirBlue Sharing may seem a bit expensive. But it’s actually cheaper than the alternative by a couple of dollars. Jeff should have a review video up shortly, but if you feel like you’ve seen enough to buy it, you can find AirBlue Sharing in the BigBoss repo.

What do you think of AirBlue Sharing?