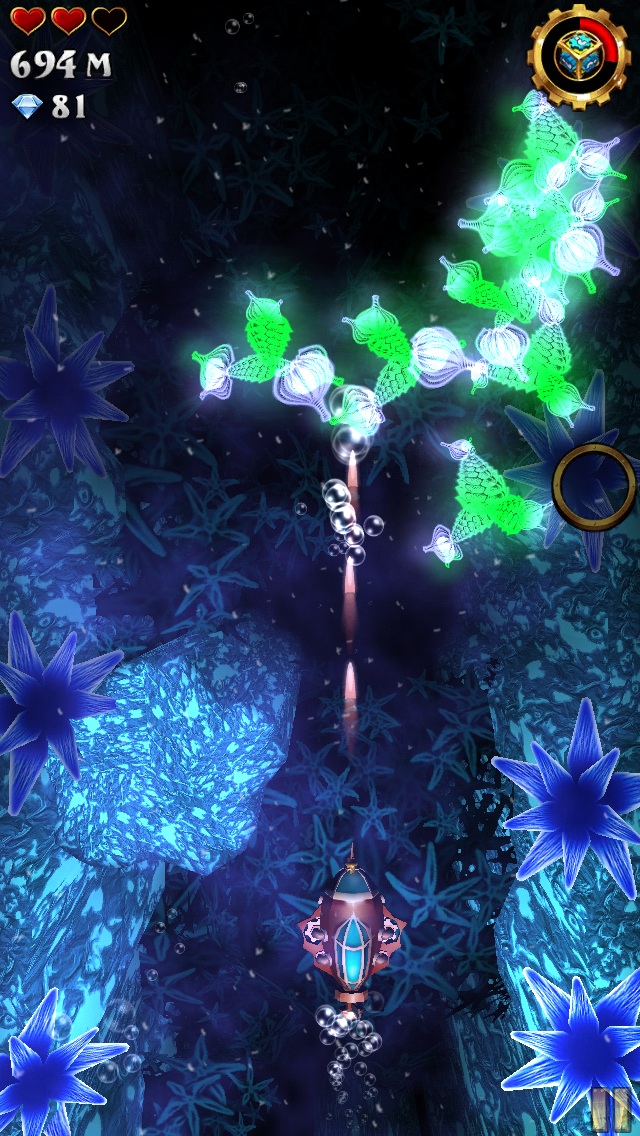 A few days ago, I told you about the vertical shoot-em-up (shmup) game M.A.C.E. As a follow up for fans of games like the Raiden series of long ago, we’ve got another vertical shmup for you, only this time it’s underwater.

The look of the game reminds me of Osmos. The underwater sea life that is on the attack is translucent, brightly colored and glowing. The creatures float by in Zen like calm as they try to blast you out of the deep. Your ship is a mix between something Jules Verne would have thought up with something you’d find at a Maker Faire.

The creatures out front are brightly colored and lit up. However, the background scenery is darkly decorated. Some sections have filigree-like designs while others look like the cliffs of a hellish underworld. The rock edges seem to nearly jump out at you, giving a clear 3-D visual to the vertical landscape.

The game can be controlled by either dragging your finger around on the screen or by tilting your device. Gesture based controls are the default setting. You can switch to tilt controls in the Settings menu. 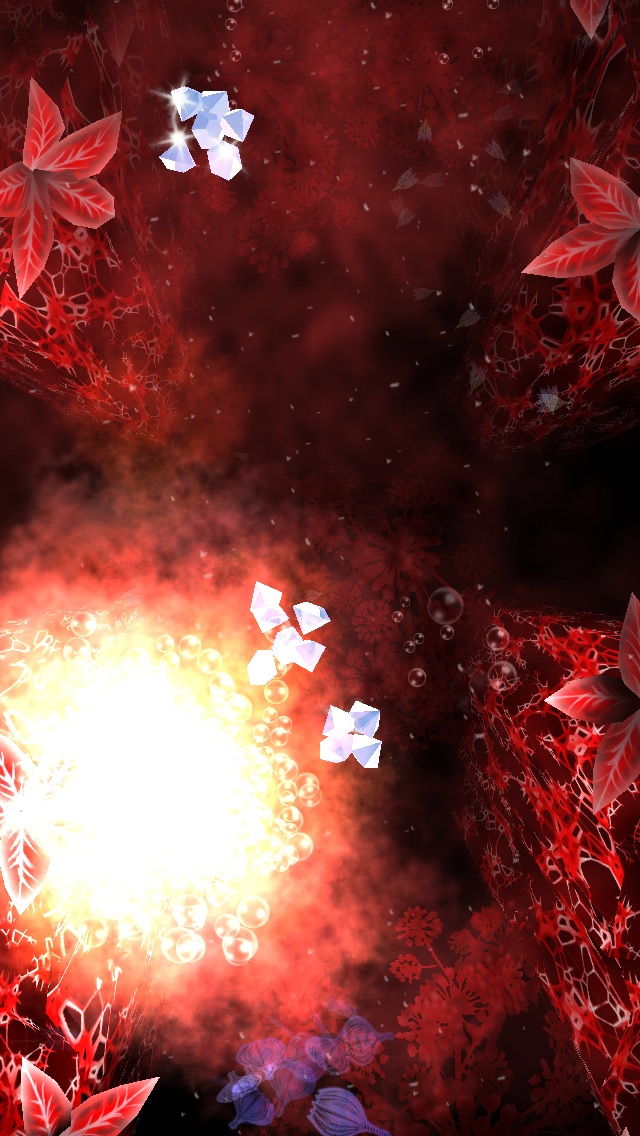 The game begins with you behind the wheel of a steampunk-inspired underwater shuttle. Before the game starts, you will be able to choose a special weapon to equip on your ship. These weapons have limited ammo, but you can buy more using gems that you collect as you play. The ship automatically blasts short bursts of firepower at anything in front of it. To shoot down creatures, move the ship in front of their path. Some water monsters attack in a row that moves closer to you along a straight path. Once you’ve destroyed one, the next enemy will be directly behind to take up the slack. If you make one small mistake, you might miss a shot and lose your upper hand in the shootout.

As your ship floats along the narrow path, your job is to destroy the brightly colored enemies as they approach. Collect gearboxes to activate special weapons, like lasers and missiles. These weapons only last a few seconds, but tend to do a lot of damage. You can also use the special weapons that you’ve equipped at the beginning of the game. However, it may be better to save those for big bosses, since they are so difficult to beat.

If a bad guy hits you, it will cause one full damage point. Players start with only three damage points. If you lose all of your health, you can pay gems to restart from your current location or just start over from the beginning.

As you destroy enemies, they will leave behind crystal gems. These gems are used to purchase upgrades for your watercraft. You can increase the length of time that different weapons are enabled, strengthen your armor, and skip ahead in the game a few hundred feet one time. You can also save up your gems to purchase one of the six additional submarines, including a Ghostship and Mechafish.

As you play the game, you will increase in levels by completing missions like killing 60 enemies, or collecting 500 gems. When you complete three missions, you will increase one level and unlock new bonuses and upgrades. You will also earn big gem rewards in Mega Missions. For example, the first Mega Mission requires you to kill 2,000 creatures within a four-day period of time. 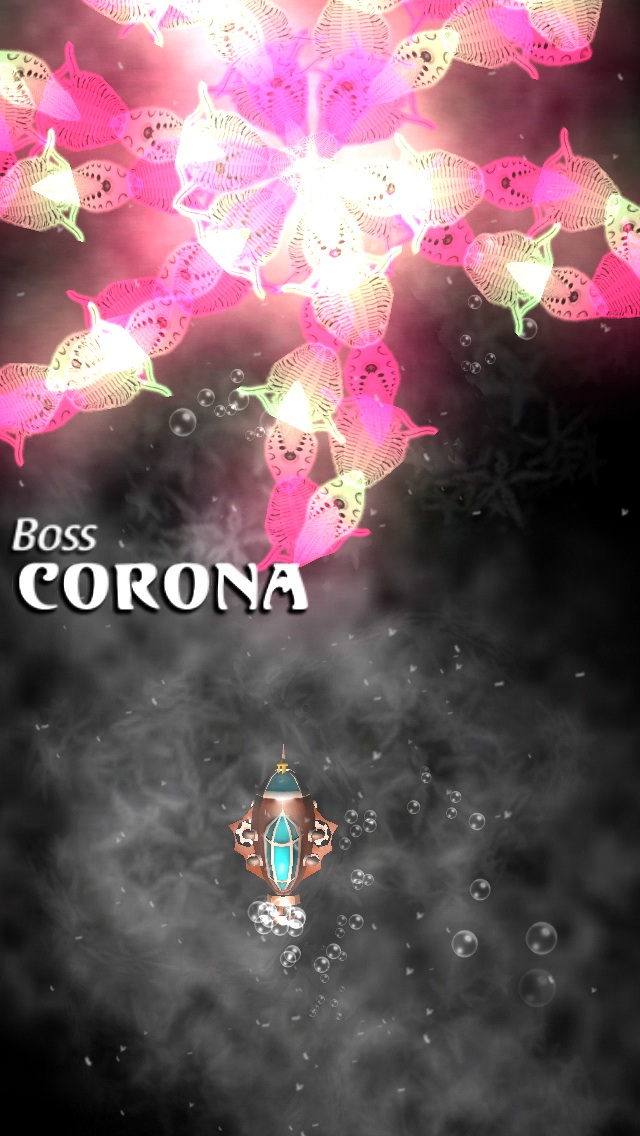 This is a traditional shmup vertical shooter game that is a lot like most games in the genre. If you pixelated it and put a different skin on it, you’d feel like you were back in 1987, and I mean that in a good way.

Even though you pay to download the game, it is heavy on in-app purchase options. There are some missions that seem impossible to beat without having a lot of gems. For example, one mission is to kill a certain number of enemies with bombs. The bombs are special weapons that cost 1,000 gems to replenish. You could skip that mission, but that would cost you at least 6,000 gems. Plus, to continue from where you were when you died costs 350 gems the first time, and increases exponentially each additional time. You can get through without purchasing additional gems, but the game certainly makes it easier for you to play if you spend money in it.

Abyss Attack costs $0.99 to download, which is a very reasonable price for a game that looks so good and plays so well. However, as I mentioned above, you will probably feel pressured to spend more money on in-game gems, which increases the cost and decreases the overall value of the download. You can play the game without buying more gems, but the rationalization to purchase them is very enticing.

Fans of vertical shooter games will love the look and feel of this game. Its basic mechanics are very traditional. It is practically like playing a game from the mid 1980s, but with better graphics. If you like vertical shooters you should add this to your collection. This game is available for the iPhone and iPad. Download it in the App Store today.

I mentioned M.A.C.E. above, but this game is also a revamped version of the Raiden series of vertical shooters.

What is your favorite shmup from your childhood?