The U.S. Department of Justice Friday tweaked its ebook settlement offer, including emails between Steve Jobs and Apple’s marketing head. The revised settlement charges Apple altered its in-app purchasing policy “to retaliate against Amazon for competitive conduct that Apple disproved of.”

“If they want to compare us to Android, let’s force them to use our far superior payment system,” Jobs wrote on Nov. 22 of 2010. According to GigaOM, Department of Justice lawyers now say that email coupled with prior Apple testimony about in-app purchases “misrepresented the factual circumstances.” 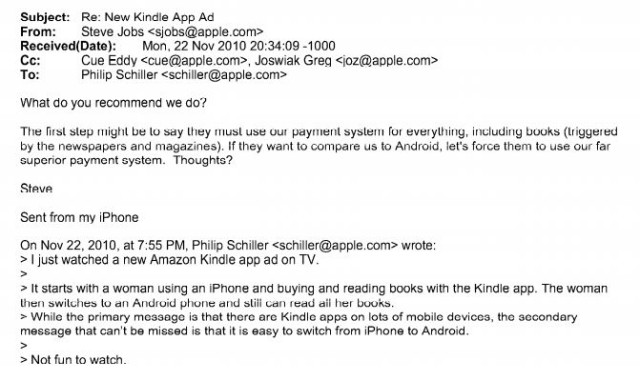 “Apple misrepresented the factual circumstances surrounding this matter, including how the App Store operated and operates,” the government said in its latest court filing.

It is simply not true that Apple receives a 30 percent commission from all retailers for all goods sold through apps.

The government contends physical items can be purchased through an Amazon.com iPad app and Apple does not receive a 30 percent cut. In other words, Apple was forcing only ebook sales from Amazon to go through the in-app process, the government claims.

After Apple was found guilty of colluding with five publishers who had earlier settled, the Department of Justice offered the iPhone maker a settlement agreement. The agreement requires Apple to end agreements with the publishers, not enter into contracts that might hurt competition and allow retailers to directly link to their ebook stores within apps on the Apple devices.

For its part, Apple has decried the offer, calling the proposal “draconian and punitive”.

A judge has denied Apple’s request to suspend the guilty plea until an appeal can be heard. A May trial is scheduled to determine damages.

In related news, both Apple and Samsung won their bid to keep secret financial details previously ordered made public as part of an earlier copyright infringement lawsuit, reports Bloomberg. A federal U.S. Court of Appeals in Washington, DC rebuked the trial judge who had ordered the financial information from both Apple and Samsung be made public.

U.S. District Court Judge Lucy Koh, who presided over the trial, kept her order to make trial exhibits public, pending the outcome of the appeal. A November retrial is scheduled on damages Samsung must pay.