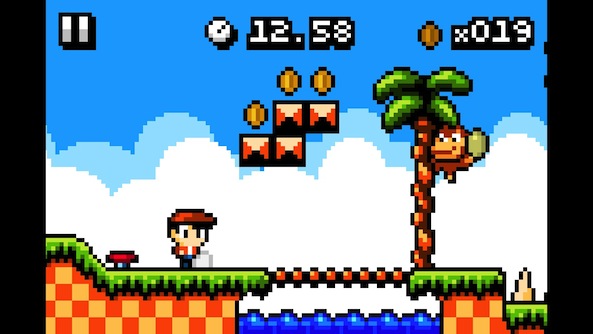 When I was really young, I didn’t have a gaming console. I didn’t own a NES until I was nearly a preteen. That didn’t stop me from falling in love with Super Mario Bros. and other side-scrolling platformers at a young age.

Kid Tripp captures your youth by recreating the pixelated imagery that defined a generation, while offering a measure of fast-paced challenge that is not typical of games in the genre…

Big, blocky, beautiful pixels. I don’t care what anyone says. Retro games, when designed well, are just as good looking as any over-hyped graphics-heavy game. It is full of brightly colored, well placed pixels that remind me of a time when going to an arcade meant spending hours in a stale, loud electronic playground where I spent every last quarter in my piggie bank trying to save the princess.

Your adventurer runs automatically. Your job is jump and shoot at the exact right moment in order to make it to the end of the level. That’s all there is to it. I hope you have fast reflexes.

The game has been optimized for the iPhone 5 and the iPad. However, a glitch has caused the black bars to appear on both sides of the screen. The developer is aware of the issue and a fix is already being prepared for approval in the App Store. 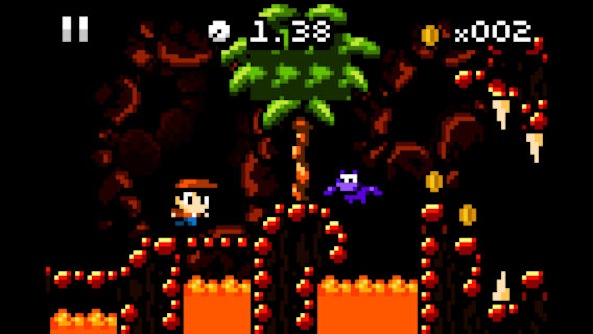 Did I mention that the Kid runs automatically? He is fast, too. If you don’t time your jumps exactly right, you’ll fall short or over reach and end up in the pit below. As birds fly past and frogs jump over, you must plan your shots wisely or you’ll miss and they will be on you in the blink of an eye.

Unlike a typical platformer, you don’t get a second chance. If you die, you have to start from the beginning, no matter how far you’ve gotten, even if you are right at the end.

Each game comes with 10 lives and you can earn extras by collecting coins. If you run out of lives, and you probably will, you can continue the game from your current level, but you will lose all of your coins.

If you make it to a new level, you can replay it later to try to increase your time score. You don’t have to complete the level in your main game in order to access it later. This is actually a good way to practice a level without losing a life. You can replay it over and over again until you have every step timed out properly, then go back to your main game and play through the level without dying.

This game is very challenging. It is not the casual adventure that most other platform games are. You are on the edge of your seat, trying to jump and shoot your way through a 30-second obstacle course where you fail more often than you succeed. Super Mario Bros., this is not. It is, however, a really fun fast-paced arcade game that will make you want to throw your iPhone at the wall. 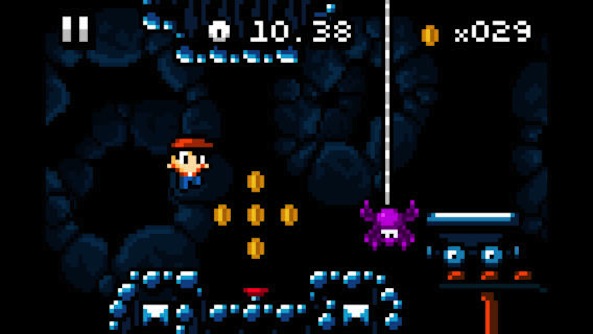 When I first saw this game, I assumed it was going to be a typical platformer game, which would have been great. However, I was pleasantly surprised to find that this game is much more challenging and offers a fresh take on a traditional genre, even with the old-school retro look.

The level of difficulty keeps this game from being something you can sit down and play for hours at a time. It is better played in spurts of a few minutes at a time. Otherwise, you might end up kicking your dog or yelling at your wife for no reason.

Kid Tripp is only $0.99, which is exactly the right price for a game like this. I don’t know how many levels there are because I can’t flipping get past the third one. However, I can tell from the game’s trailer that there are at least a dozen, probably more.

This is not your childhood platformer game. If you are hoping for a Super Mario Bros. knockoff, you’d better look somewhere else. Instead, if you are a fan of side-scrolling pixelated games that require accuracy and fast reflexes, then you’ll find Kid Tripp to be a real treat. This game is available for the iPhone, iPad, and iPod touch. Download it in the App Store today.

This game reminds me of Meganoid in its level of difficulty combined with a retro look. It is also has faint similarities to A Ride into the Mountains because they are both pixelated and feature a main character that runs on auto.