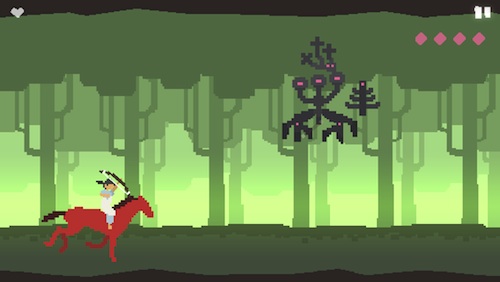 You may not be a fan of gaming on your iPhone. Maybe you have Angry Birds and Sonic CD just to give you something to do while waiting for the bus. You may be the kind of person who prefers gaming on a living room console instead.

A Ride into the Mountains may change your mind, or at least give you a reason to add another game to your iPhone. It is simple, fun, and will keep you coming back for more…

This game uses the retro style of heavy pixelation in combination with the subtle color of muted tones. The background is basic with shadow and light combinations to imply a folkloric landscape. There is one hero who rides a chestnut mare through forests, hills, and mountains to find a mysterious relic to save the world.

The horse runs automatically, but you can speed up or slow down to avoid oncoming attacks. Players shoot down flying enemies using a touch-and-drag control system.

The music that accompanies the game is almost as important as the game itself. It is peaceful and Zen-like, making your casual adventure game feel like a practice in relaxation.

There is not much to the game’s tasks and goals. You must shoot down your enemies before moving onto the next area in the forest. It is minimalistic, in a way, because the controls are simple and the gameplay is basic. 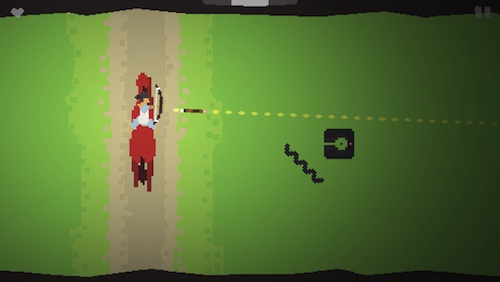 Players control Zu, a young farmer with a gift for archery. He must travel across the land to find an evil relic that has the potential to destroy his village. You are tasked with destroying monsters that have appeared in the area by shooting them with your bow and arrow.

Zu is on his trusty steed. The horse runs automatically, but you can speed up or slow down his movement by tilting your device. Depending on which level you are on, you will tilt from side to side or front to back.

In addition to adjusting the horse’s speed, you must aim and shoot your bow and arrow at the enemy. Different levels feature different tasks, but the basic attack is the same. You must drag your finger across the screen to line up the shot and then let go when you think you’ve aimed properly. The longer you keep the draw, the further the shot will go.

The first section has you running from left to right across the screen and shooting at enemies above. The monsters will try to kill you by throwing ninja stars and boomerangs. It won’t affect you if the weapon hits your horse, but one blow to the head and you have to restart that particular battle.

In the second section, players run from bottom to top and shoot enemies on the left and right. In this round, you can slow down the action and take aim with a special ability.

Each section features a boss to fight. The boss will have a health bar showing how many more shots you need to kill him. He will also be able to produce minions that will try to destroy you.

If you are killed, you don’t have to start the run from the beginning. Instead, you will start from the battle that you just lost. There is no way to replay earlier levels unless you reset the game.

As you complete achievements, you will earn trophies, which you can view in the trophy room.

There are seven different sections that feature a different landscape, like hills, lakes, mountains, and more. On your journey, you will find the evil relic and bring balance to the land. 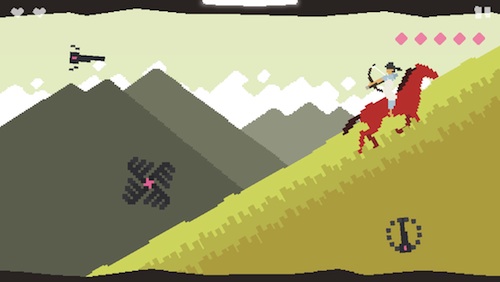 This game is very simple to play. It does not require much of your attention, but it is far from boring. Although it is challenging, it is also relaxing. You won’t feel frustrated if you don’t kill your enemy fast because you will be able to pick up right where you left off, no matter where you are. You don’t run out of arrows or suffer penalties for taking too long. The goal of the game is to complete the journey.

A Ride into the Mountains costs $0.99. This is the perfect price for a game in the casual adventure genre. The replay value is low since you can’t replay any levels without resetting the game, but you will definitely get your dollar’s worth out of this game.

Fans of casual adventure games will enjoy the simplicity that this game has to offer. It is easy to pick up and play at any time and you won’t even lose your place in the game if you suddenly shut down the app. It is available for the iPhone, iPad, and iPod touch. Download it in the App Store today.

Kid Tripp is another new pixelated game that is part of the adventure genre. Jumping Dr. Tap could be considered a similar game. However, A Ride into the Mountains is fairly unique and it is hard to compare it to other games in the genre.