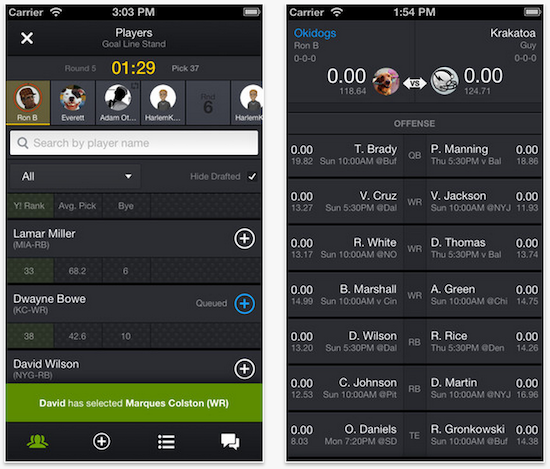 Yahoo has posted a major update today to its popular iOS Fantasy Football client, bringing the app to version 5.0. The update features a slew of new features and improvements to get you ready for the start of the 2013 NFL season.

Former users of the app will note some nice UI tweaks and other enhancements, but the biggest addition is perhaps the ability to draft players. Previously, fantasy team owners were required to use a computer to conduct their drafts…

• Enjoy our redesigned app. It’s faster, simpler, and more useful than ever before!
• Draft from your iPhone or iPad. Pick players, set your queue, check results, and chat with other managers. Never miss a pick again.
• Prepare for your real draft with mock drafts. Practice your strategy and get an edge on the competition when it counts.
• Even more updates are on the way!

And here’s the announcement from Yahoo’s blog:

“Today, the Yahoo! Fantasy Sports mobile team is proud to share some news. We’re launching the 2013 Fantasy Sports app for iPhone, iPad, iPod touch, and Android smartphones, with a new design and lots of great new features. Front and center is what you’ve all been asking for —mobile drafting!”

The app itself is great—transitions are smooth, graphics are sharp and the menus are really easy to navigate. I obviously haven’t set up anything in it yet, to test functionality, but I’ve used Yahoo’s Fantasy app before so I know it’s good.

If you’re interested, you can find Yahoo! Fantasy Sports — Football in the App Store, for both iPhone and iPad. Keep in mind, though, that you’ll have to login with, or sign up for, a Yahoo account and setup or create a fantasy league to start.

The 2013 NFL season opens Thursday, September 5 with the Baltimore Ravens playing the Broncos in Denver.