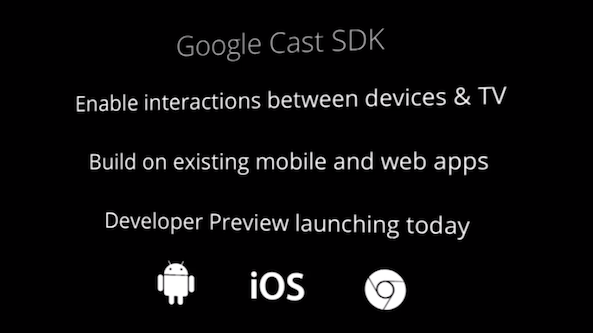 Alongside a new Nexus 7 tablet, and a new version of Android, Google launched a new TV accessory today called the Chromecast. Not to be confused with the short-lived Nexus Q, it’s a tiny HDMI dongle that offers wireless device-to-TV streaming for just $35.

The device uses Google Cast, which like Apple’s AirPlay feature, allows users to stream videos and other content from their smartphones and tablets to their television sets. Unlike Apple’s offering, though, Google is opening up its Cast tech to multiple platforms…

“In addition, Google is also launching the Google Cast SDK for developers on iOS, Android and Chrome, which will allow them to enable their apps to stream right to their users TVs. The new SDK, which is officially in beta (or “preview,” as Google calls it), will be available later today.

The SDK, Google says, will enable interactions between devices and TV. Developers don’t have to build new apps for this platform, the company stressed, but will be able to build on their existing mobile and web apps.”

While the Chromecast accessory is the first instantiation of the Cast protocol, Google says that it expects the technology to be embedded in a range of hardware from its partners. It’s hoping that manufacturers and developers will support it the way they have AirPlay.

As I said earlier, I’m actually really looking forward to playing with a Chromecast and seeing what third-party developers can do with it. It looks like Netflix and YouTube iOS apps are already on board, and I’m sure that several more (like Chrome) will follow suit.

If you’re interested in picking one up yourself, they’ll be available later today through Best Buy, Amazon, and the Google Play Store for $35.

What are your thoughts on Google’s Chromecast and Google Cast initiative?