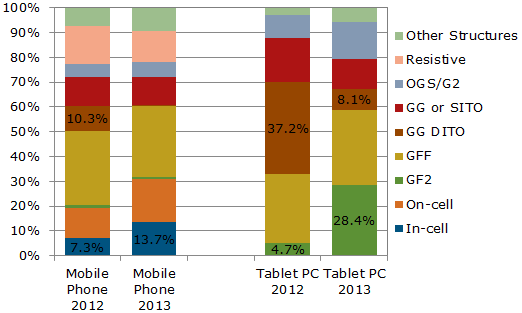 Specifically, DisplaySearch notes Apple’s shift toward in-cell display tech for the iPhone 5 and GF2 for the upcoming iPads has resulted in major shifts in the touch-panel industry supply chain. Basically a double-sided ITO film, GF2 has allowed Apple to make the iPad mini much thinner and significantly lighter compared to the bulkier G/G touchscreen tech driving the iPad 3.

As the iPad 5 is widely expected to adopt the iPad mini’s thin and light appearance, obviously a major part of that will be Apple’s adoption of the advanced GF2 technology…

And because Apple has a relatively high market share and sells premium products that incorporate premium technologies, any technological movement on the firm’s part is “felt throughout the component supply chain,” Calvin noted.

Call it the Apple effect.

Asian media claims Foxconn will exclusively assemble the next iPad mini, though the device probably won’t launch before 2014 due to ongoing challenges dealing with mass-production of 7.9-inch Retina panels.

At any rate, Apple should show its cards in October and KGI Securities analyst Ming-Chi Kuo is adamant that the iPad 5 will be the “highlight of iPad in 2013.″

Apple’s current full-size iPads use a GG touch screen structure, as do all 2007-2011 iPhones. For the iPhone 5, Apple engineers switched to in-cell technology which allows for a much thinner appearance by eliminating a layer by building the capacitors inside the LCD assembly itself.

The firm again switched to the more advanced GF2 for the iPad mini in 2012. Again, adopting GF2 tech in the upcoming iPad 5 is believed to have contributed in large part to its rumored iPad mini-like appearance, down to the skinnier bezels and chamfered edges.

As for the iPhone 5S, Apple is said to switch from the in-cell process to Touch-On-Display, a technology that should address the multitouch lag observed on the iPhone 5 when rapid-swiping.