A French blog which earned a reputation of posting images of geniunie-looking Apple product parts is back at it again, posting this morning a set of purported design schematics claimed to be for Apple’s fifth-generation iPad.

Matching up a number of past reports, these alleged photographs suggest the iPad 5 indeed has adopted a form factor very similar to the current iPad mini model…

According to the French blog NowhereElse.fr which posted these images, Apple has relocated the iPad’s speaker from the back to the bottom, like on the iPad mini. The design schematics also picture rounded off back corners, a thinner body and a reduced width stemming from the skinnier side bezels – again, all iPad mini design feats. 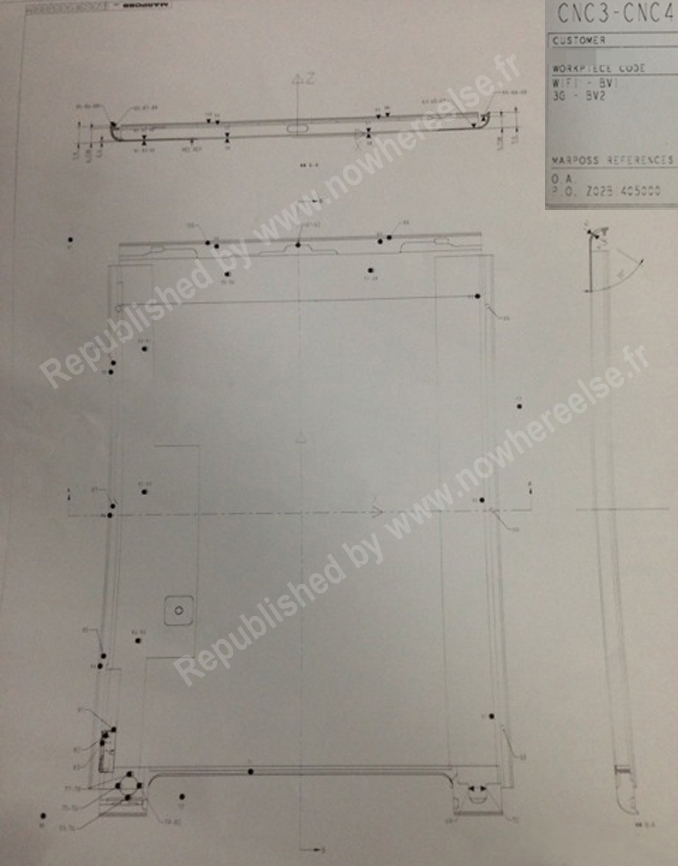 Here’s a comparison of the iPad 5 design versus prior iPads. As you can see, the device should be thinner than the current-generation iPad 4, virtually matching the iPad mini’s thinness.

If DigiTimes is to be trusted, a 33 percent lighter and 15 percent thinner iPad 5 is headed for a September release. In a follow-up report, the Asia trade publication claims volume production of the iPad 5 will begin in July-August, with initial shipments pegged at five million units.

It should be noted that NowhereElse has had its fair share of misses as well, the latest example being a purported iPad 5 front panel which was soon debunked as an iPad mini digitizer.

On the other hand, detailed schematics are not as easy to doctor as photographs of supposed next-gen product parts and this particular schematics look pretty legit to me.