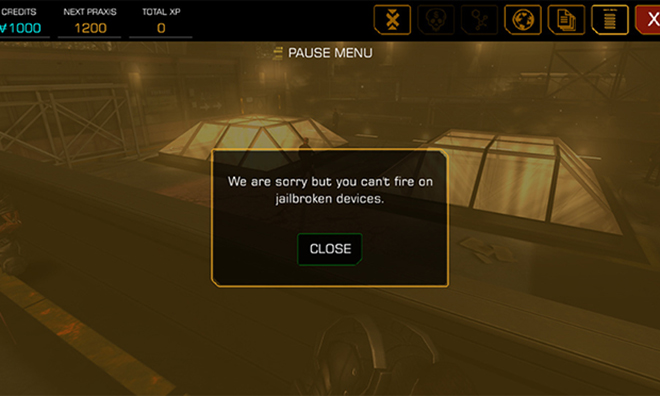 Square Enix drew lots of heat for itself after it was discovered that its new premium iOS game, Deus Ex: The Fall, contains a restriction preventing weapon firing on jailbroken devices, making it impossible to progress past the tutorial without applying the xCon tweak from the ModMyI repo in Cydia.

Square was quick to apologize and attribute the risky decision to a bug, promising to remove the odd limitation in a future update. Making good on its promise, the company has just released an update to The Fall which does away with the anti-jailbreak measure…

Other changes include the following items:

The 808MB update is available free to those who have purchased the $4.99 universal binary. The Fall supports iPad 3 or above, iPad mini, iPhone 4S or above or fifth-generation iPod touch.

Support for the iPad 2 and iPhone 4 is coming in another update, Square promises.

Note that the game requires 1.6GB free space to install.

Who’s going to be playing The Fall now that it’s  jailbreak-friendly?