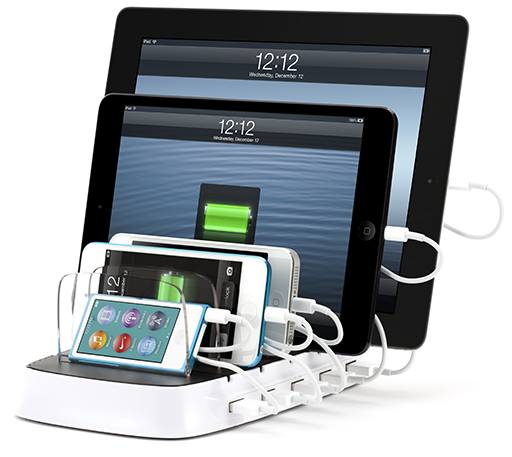 The accessory maker Griffin at this year’s CES in January 2013 took the wraps off the PowerDock 5, an intriguing charging station capable of charging and syncing up to five devices at once. Each of its five bays features an individual 10-watt, 2.1-amp power supply.

This lets you charge any iOS device, including the power-hungry iPad 3 and iPad 4 (which can be docked even in their cases). Those eyeing this ultimate charging station should be pleased learning that Griffin today started shipping the PowerDock 5…

The gizmo taps Griffin’s ChargeSensor tech to determine the requirements of a plugged-in device, providing optimal charging for all USB-chargeable devices, not just Apple’s.

What’s best, it takes about as much room on your countertop as a single iPad.

Here’s a look at the ports on the back.

There’s an illuminated power status light out the front.

PowerDock 5 gives each tablet its own charging port and its own clear backrest. Each charging bay is roomy enough to accommodate your iPhone, iPod or iPad in their cases.

An illuminated status light tells when PowerDock 5 is powered up and ready to charge.

The accessory costs $100 (cables not included) and supports the iPhone 3G or later, all iPads including the iPad mini, all iPod touches except for the original model, fourth-gen iPod nano and up, the iPod with video and both 2007 iPod classic models.

The gizmo is available now via the Griffin web store.