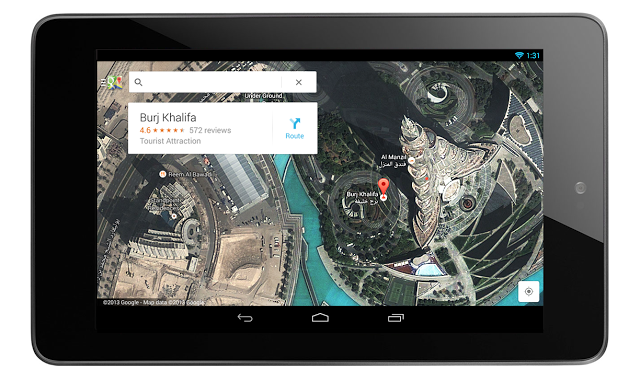 As announced on Google’s official Lat Long blog yesterday, the company has begun rolling out a major update to Google Maps that was first showcased at Google I/O 2013 in May. The company has issued a promotional clip to detail some of the new features, now available to Android 4.0.3+ users as a free download on the Play store. Although the new build hasn’t hit the App Store yet, Google said it will be soon available for iOS 6+ devices…

Among the upcoming new features is enhanced navigation with real-time incident reports (courtesy of Waze) and alerts when a better route becomes available. Other improvements include a revamped appearance across platforms, enhancements to reviews, Zagat and Offers and a new Explore feature where you get cards showing places to eat, drink, sleep and shop just by tapping the search box.

Here, check out the promo clip.

Google removed Latitude and check-ins from the app and said it will be retiring these from older versions on August 9. But don’t worry, location sharing and check-ins to Google+ are coming soon to iOS. My Maps functionality is not supported in this release, but will return to future versions.

“People who want to create powerful custom maps can still do so with Maps Engine Lite on desktop,” Google explains. Last but not the least, Google tweaked how offline maps for Android work: oddly, you must now type ‘OK Maps’ into the search box when viewing the area you want to access offline for later.

The new Google Maps can be downloaded to Ice Cream Sandwich and Jelly Bean Android devices via Google’s Play store. It “will be available soon in the App Store”, Google promised. It’s a staggered release so expect to see it rolling out gradually over the next few weeks.

At post time, only the old Google Maps version 1.1 app for the iPhone and iPad was available in the App Store, last updated in May.