You have a whiz-bang idea for an iOS app, but want to know how much effort it will take to get into the top 10 list? On general, it requires 4,000 daily downloads for an app to reach the top 10 paid apps, and it requires earning $47,000 per day for paid apps to reach rank 10 in the grossing charts, a new study finds. For the bean-counters in the audience, that translates to $32 in purchases per minute or $1,920 per hour.

Another tip: never try to break into the top 10 during weekends. Instead, you’ll have better luck on Thursdays. If you want little competition, try Google or Amazon, where all you hear are crickets chirping, according to an app analytics firm…

The numbers from Distimo’s monthly iOS App Store trends report, averaged app revenue and downloads during May. According to the report, apps looking to become No. 50 need on average to pull in $12,000 per day, less than one-third of that required to break into the top 10.

For free apps it’s all about downloads. 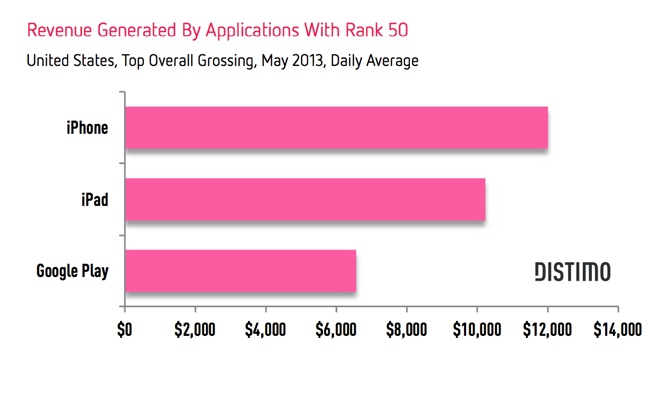 If the challenge is too stiff, you might want to focus on iPad-only apps.

A paid app needs to gross just $10,200 per day for top 50 status. For free apps aiming for the top 50 iPad list, you need just 8,200 downloads each day, nearly three times fewer than for iPhone apps.

Maybe competition for iPhone and iPad app status is too much for you. 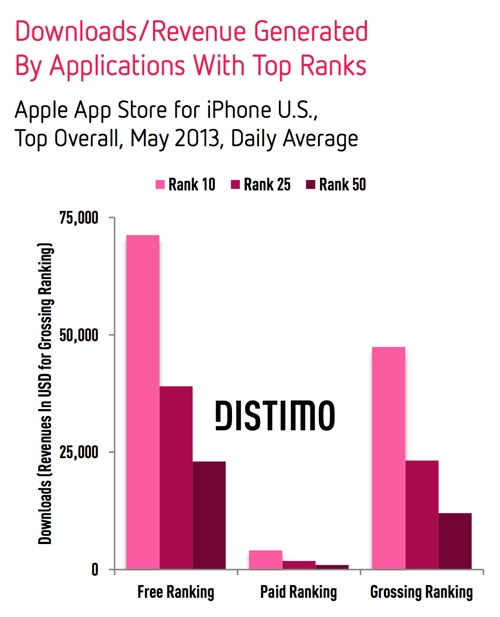 The numbers are even more miserable at Amazon. It requires only 2,500 downloads per day to make it into the top 50 at Amazon – 9 times fewer than at Apple.

As in many things in life, timing can be everything – and that includes making it big at Apple’s App Stores.

For instance, weekends mean a crush of competition as apps compete for a slice of a huge audience. Think of it as the App Store equivalent of the rush hour.

Instead, you might be better off trying on Thursdays, which demand the fewest number of downloads to rank on the App Store.

Today’s findings aren’t that surprising, given Distimo’s previous report which found the top App Store earnings brought in 4.6 times that of top apps on Google Play.

And this is why there is such a demand to break into the App Store and the others are left to the crickets.