The Big Red carrier now has 4G coverage in nearly 200 more markets than AT&T does. Verizon added a hundred new LTE markets in just eight months and was the first U.S. telco to start deploying high-speed LTE cellular technology two and half years ago. The company also announced it will begin rolling out Voice over LTE (VoLTE) technology starting next year…

According to a media release, Verizon’s LTE covers 500 markets in 49 states. Its 500th LTE market is Parkersburg, West Virginia. Liberal, Kansas and Warren, Pennsylvania are also getting LTE service today. Additionally, the carrier promised to flip the switch on LTE next month in Alaska. 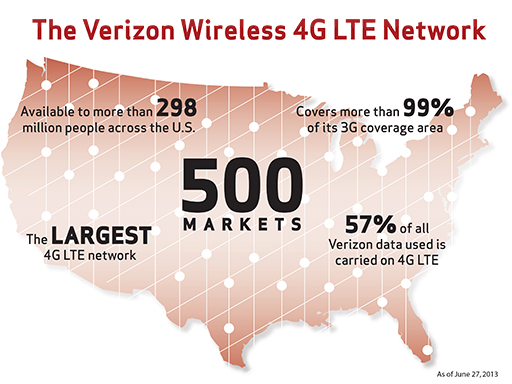 According to recent tests by Consumer Reports, Rootmetrics and PC Mag, AT&T’s LTE comes in fastest, but nobody can touch Verizon in terms of coverage. Verizon’s LTE typically delivers speeds of 5-12Mbps down and 2-5Mbps up.

Bloomberg reports that the company “is planning a sweeping upgrade of its network this year after surging congestion and deteriorating speed allowed AT&T to close the gap on service quality.”

Speaking to reporters, Verizon chief network officer Nicola Palmer said his company will begin deploying VoLTE in early 2014, The Verge reports. It won’t be a staggered rollout as Verizon is expected to rapidly deploy the service across its LTE network.

What VoLTE does for you is deliver the voice service as data flows within the LTE data bearer, without requiring the legacy Circuit Switch voice network. And thanks to LTE’s throughput and bandwidth, VoLTE calls are more audible and crisper than your typical cell phone call.

The recommended speech codec for VoLTE is HD Voice. Though none of the major U.S. telcos support HD Voice, they’re all over it. In the meantime, hacked carrier updates enable HD Voice on an AT&T, Verizon and Sprint.

The carrier will start carrying LTE-only smartphones by the end of next year and it doesn’t expect to refarm its existing 3G spectrum to LTE until 2015. The carrier will use the Advanced Wireless Services (AWS) spectrum acquired from cable companies last year to double the speeds of its current services.