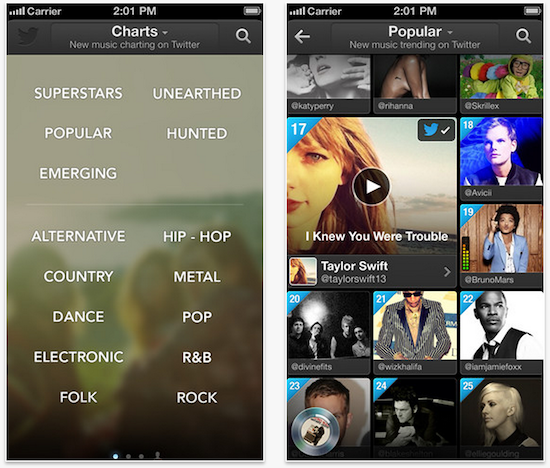 Twitter has been relatively quiet about its #music app since it launched back in April. But now that Apple is getting into the music discovery business, and companies like Rdio are following suit, it felt it had to step up its game.

And it starts today, with an update to its iOS #music app that adds new dimensions to its popular discovery engine. You can now browse for new music via genre, like hip hop or country, and there are new ‘top charts’ to explore…

“Genres! Get hip-hoppy or get your metal on or get your dance beats grooving with Twitter #music genres! Tons of genres plus Superstars, Popular, Emerging, Unearthed and Hunted charts.

This build also includes:
• Fixes for some scenarios that could cause tracks to be unavailable.
• Rdio authentication now happens in-app, rather than kicking you out to Safari.
• We have stomped many bugs so that you don’t have to.”

Essentially, all of these changes enable you to find new music that interests you. Where before there were just two charts, Popular and Emerging—with a focus on Popular—there are now Superstars, Unearthed and Hunted charts.

And that’s just the tip of the iceberg. The big change is the ability to explore Twitter #music based on your favorite genres. So if you only like a specific type of music, like let’s say heavy metal, you don’t have to listen to country tracks.

Twitter is spotlighting all of these new options by forcing its #music app to open to the new Charts/Genres screen, so you shouldn’t have a problem finding them. If you’d like, you can grab Twitter #music from the App Store for free.