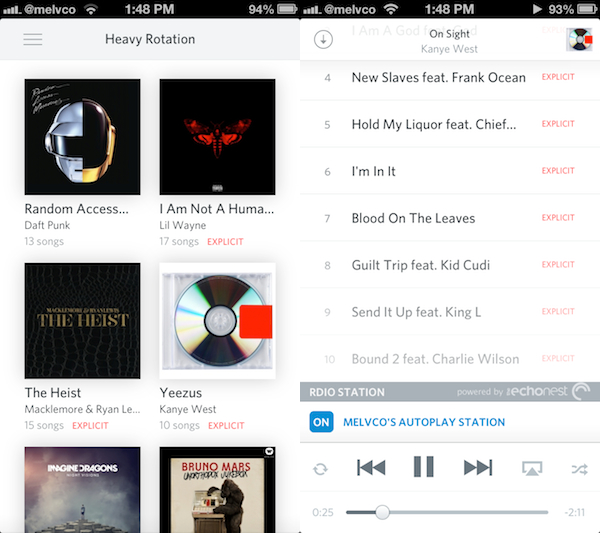 Apple sent shutters through the music streaming industry last week when it confirmed rumors that it had been working on a new radio service. The still-in-beta service allows users to create custom radio stations based on their favorite songs, genres, artists or albums—similar to Pandora.

iTunes Radio won’t be available to everyone until the fall, but early positive feedback has some music services scrambling to respond. And today, Rdio issued its response in the form of an app update that includes Song Stations, a feature that allows you to create custom radio stations…

• Song Stations. Start a station based on any song to hear more from that artist and other related artists. See four upcoming tracks and skip as much as you want.
• AutoPlay. After the music you’re playing has ended, hear more like what you’ve recently listened to.
• Various UI improvements and minor bug fixes.

Unfortunately, the two big new features, Song Stations and AutoPlay, are only available to paying Rdio customers. It would have been nice to see the radio-like features made free like they are in Spotify or Pandora, but I supposed they’re nice additions to the app for folks who already subscribe.

That being said, the app itself is gorgeous (its design is very similar to certain iOS 7 UI elements) enough to entice you to try out the service. If you’d like, you can grab it in the App Store for free, and Rdio will give you a free 14-day trial. After that it’s $4.99 for web access and $9.99 for unlimited.