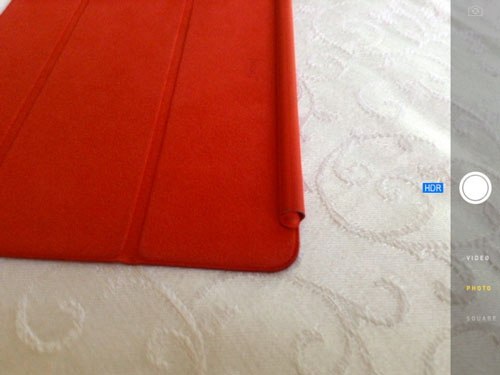 As Cody mentioned yesterday, iPad support is among the headline changes the newly-released iOS 7 Beta 2 has brought to the table. Jeff did a nice video tour of iOS 7 running on an iPad, highlighting key features such as Control Center, Notification Center, App Switcher, Photo Booth and more. In addition to these, the iPad versions of iOS 7 also enables High Dynamic Range (HDR) photography, an advanced imaging technique previously available only on iPhones and iPod touches…

A new high-dynamic-range (HDR) option can be found in the iOS 7 Camera app on the iPad, as discovered by Zac Hall of 9to5Mac.

For those unfamiliar with the feature, HDR works by taking three images in a rapid succession – one in standard and the other two in over and under-exposed modes.

The software then combines the three photographs into a single HDR image in order to bring out details in shadow while providing greater color accuracy and crispness for overexposed areas.

This is especially useful when shooting darker objects under direct sunlight and in low-light conditions. As you know, Apple launched the HDR feature on the iPhone 4 and iOS 4.1 back in 2010.

This is the first time HDR imaging has become available on iPads.

I only occasionally take my snaps with HDR enabled and while the feature may not be such a big deal compared to iPhones, I’m glad Apple has finally brought this to iPads.

Are you looking forward to HDR photography on your iPad?