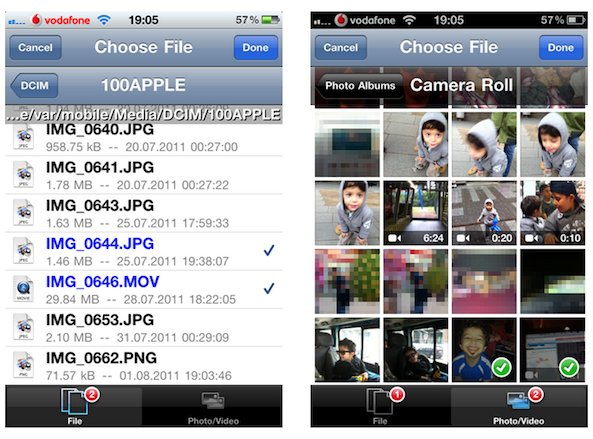 Folks who have been around the jailbreak community for a while will likely remember a popular tweak called Safari Upload Enabler. Before Apple added the ability in Safari to upload photos and videos in iOS 6, it was one of the only ways you could natively upload files from within the mobile browser.

Well we have some good news today for all of you jailbreakers, Safari Upload Enabler has finally been updated with support for iOS 6. Developed by H. Samara and N. Bassen, the new version of the tweak is out in Cydia now with a number of improvements, including a new Dropbox API and more…

As before, the tweak installs itself into mobile Safari and removes the block that Apple put in place to keep the browser from uploading certain things. Once installed, a file browser will pop up upon you tapping ‘upload’ web links. And also as before, you can configure all of the options from your Settings app.

Obviously, there are tons of third party applications that allow you to upload pictures and videos (like Facebook and Twitter) to the web, and with iOS 6 you can even do it within Safari. But using Safari Upload Enabler, you can upload all kinds of different files—like a resume to CareerBuilder or a recipe to Barista.

To be honest, I don’t ever really need to upload anything in mobile Safari—I rarely use it. But I can see how using this tweak, and maybe Safari Download Manager and iFile, could really expand the abilities of your iOS device. If you’re interested, you can find Safari Upload Enabler in the BigBoss repo for $2.99.