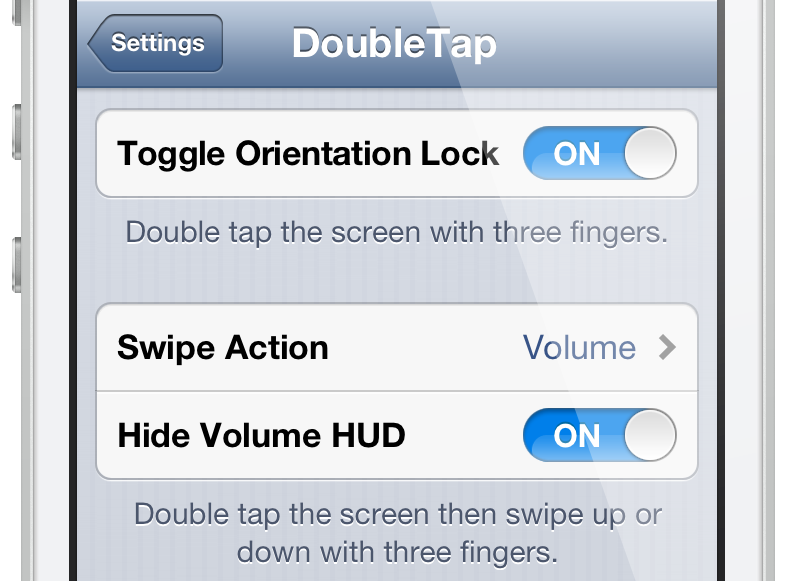 Alan Yip, the creator of Tap to Widgets and Overview, is back with a brand new free tweak on Cydia. His tweak, Entitled DoubleTap, is a release that allows users to use three-finger double tap gestures to execute certain actions.

The included actions are a brightness toggle, volume up/down, and an orientation lock toggle. Although the under-the-hood mechanics are no-doubt deeper than what meets the eye, DoubleTap is a fairly simple tweak in usage. Full video walkthrough inside.

The orientation toggle is easily invoked using a simple double tap with three fingers gesture. The other two actions — brightness and volume adjustment — use the same gesture, but they are a bit trickier to execute at first. That’s because the gestures for volume and brightness require you to continue holding after the second tap of the double tap motion, and then move your fingers up or down to correspond to an increase or decrease of volume or brightness.

The tweak’s preferences feature a kill switch for the orientation tap gestures, and an option to switch between brightness or volume for the additional gesture. You also have the ability to hide the volume HUD when using the volume adjustment gesture.

Again, DoubleTap is a free jailbreak tweak, and it’s available right now on Cydia’s BigBoss repo. If you decide to take it for a go, let us know what you experience.