Yesterday, the Department of Justice (DoJ) publicized its antitrust case against Apple in the form of an 81-page slide deck to prove that the iPhone maker has teamed up with five major U.S. publishers to form a cartel in order to raise prices of digital books. But as Tim Cook said at the D11 conference, Apple is going to fight the “bizarre” case and has no intention to “sign something that says we did something that we didn’t do”.

And while the DoJ is arguing the facts, Apple is arguing the law and accusing the government of unfairly twisting Steve Jobs’s words pulled from Walter Isaacson’s bio book. Apple’s attorney Orin Snyder denied any conspiracy and argued that “publishers fought us tooth and nail”…

The controversial most-favored nation clause in Apple’s agreements with publishers, one demanding that publishers do not undercut iBookstore prices on competing stores?

That’s only to ensure that Apple could sell e-books profitably, Snyder said and showed the following slide to highlight how the publishing industry benefited from Apple’s entry in the market for electronic books with the introduction of the original iPad and iBookstore in 2010. 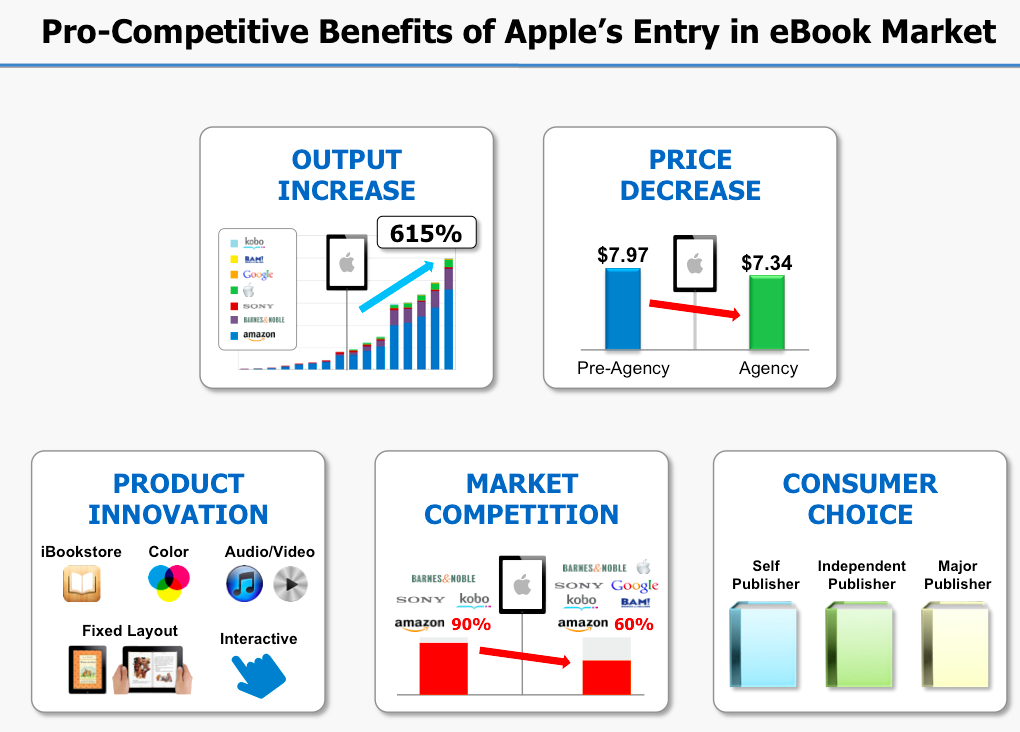 The government, on the other hand, cited email exchange between Apple’s late co-founder Steve Jobs and publishing execs to prove that conspiracy did take place, offering the following timeline of events.

The government wants to throw Apple under the bus by twisting Steve Jobs’s words, Snyder argued. Placing reliance on the “out-of-court statements of someone who’s not here to explain them or place them into context,” Snyder said, is simply unfair. 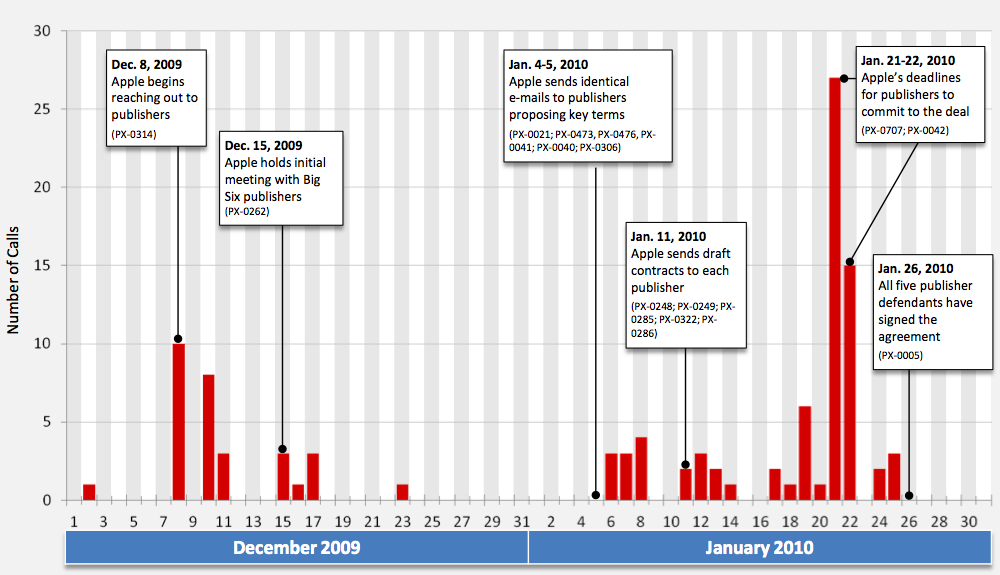 Here’s the full quote, via AllThingsD.

We can’t read Mr. Jobs’s mind, but what we can do is look at the words he used, and they certainly aren’t unambiguous admissions of a conspiracy.

To believe that Jobs’s statements are direct, unambiguous evidence, admissions of a conspiracy, you have to credit the notion that he, in full public view and to his authorized biographer [whose book] he knew would be read by millions of people, made statements that can be interpreted in no other way than as unambiguous admissions of the price-fixing conspiracy charged in this case.

Amazon screwed it up.

It paid the wholesale price for some books, but started selling them below cost at $9.99. The publishers hated that — they thought it would trash their ability to sell hardcover books at $28.

So before Apple even got on the scene, some booksellers were starting to withhold books from Amazon.

So we told the publishers, ‘We’ll go to the agency model, where you set the price, and we get our 30%, and yes, the customer pays a little more, but that’s what you want anyway.’

But we also asked for a guarantee that if anybody else is selling the books cheaper than we are, then we can sell them at the lower price too.

So they went to Amazon and said, ‘You’re going to sign an agency contract or we’re not going to give you the books.'”

Agency model is where content owners get to set the prices themselves, with Apple keeping its customary 30 percent cut, as opposed to wholesale model where a platform owner such as Amazon sets the prices itself, even if it sells warez below cost (as Amazon often does).

And while lawyers for the government called Apple the “ringmaster,” Snyder insisted that Apple and publishers were not aligned.

Quite the contrary, he argued, publishers fought Apple “tooth and nail”.

According to GigaOM, Snyder argued:

Rather, he claimed negotiations between them were “contentious and hard-fought…in some cases knock-down, drag-out fights” (becoming so “noxious” in the eyes of Random House that it would not sign a deal).

HarperCollins only agreed to an agency agreement with Apple, he said, because News Corp wanted to retain a good relationship with the company. Snyder said that Apple had “no evidence — zero — that Apple knew anything about interactions between publishers.”

Eddy Cue, Apple’s vice president for Internet services and Steve Jobs’s key man in the negotiations with publishers, is scheduled to take the witness stand on June 13.

Did the government reverse-engineered a conspiracy or should Apple be found guilty for conspiring with publishers to fix prices?