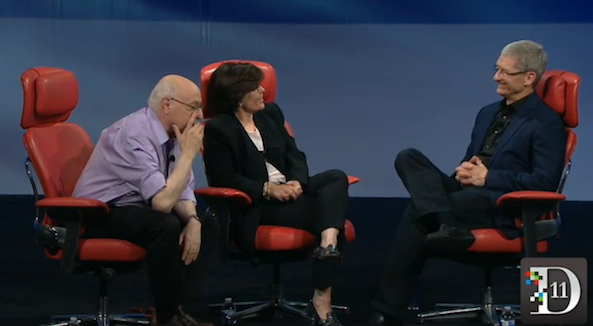 Earlier this evening, Apple’s CEO Tim Cook took the stage at AllThingsD’s D11 conference to talk about all things Apple. Cook rarely does interviews, but he looked like a pro fielding questions from tech veterans Walt Mossberg and Kara Swisher.

Over the course of the hour-long talk, the trio discussed a wide range of fascinating topics including iWatch rumors, iOS 7 and Android’s growing marketshare. And as usual, we’ve combed through it all to bring you the 15 most interesting points…

While Cook didn’t really reveal anything new tonight, he did answer a lot of questions more candidly than I would’ve thought he would. For example, when he confirmed that Jony Ive was working on iOS 7, or gave specific number of acquisitions.

If nothing else, his comments have increased my anticipation for WWDC next month, and Apple’s expected fall media event(s). The iPad-maker hasn’t announced a new product or service yet this year, so the pre-holiday quarter is shaping up to be huge.

What are your thoughts on Cook’s interview tonight?