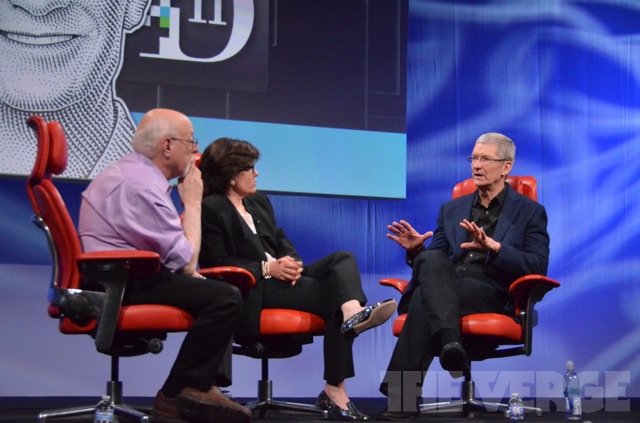 Tim Cook just kicked off AllThingsD‘s D11 conference with an on-stage interview with Walt Mossberg and Kara Swisher. The conference has become a major event for Apple, with Steve Jobs attending several of them, and Cook now a returning veteran speaker.

And he didn’t disappoint. The CEO was surprisingly candid, answering all kinds of questions from what he thinks of Google Glass, to his thoughts on the state of the TV market. He even confirmed Jony Ive is working on iOS 7. We’ve got a full recap after the break…

The first question aimed at Cook had to do with all of the changes that have occurred since his last D appearance. Walt mentioned that Samsung has grown much stronger, and there is a sense on Wall Street that Apple has lost its cool. Cook responded (via The Verge):

“Absolutely not. Let’s zoom out and get perspective. We’re a product company and we think about products. We’ve sold 85 million iPhones. 42 million iPads.

More importantly than the numbers, customers love them. Satisfaction ratings are off the charts — unprecedented. Usage is off the charts. Our share of web usage is 59 percent.

And that new products comment worked as a segway into a question about future product plans. Walt says that Apple used to be known as a company that made game-changing products, but hasn’t in a while. The question for Cook was, is it still that company? He responded:

Then television was brought up. Cook said that Apple has now sold over 13 million Apple TVs—nearly half of them in the last year. He explained that the set top box has been a huge learning experience for Apple, but wouldn’t elaborate on future plans. “There is a grand vision” he teased.

Unsurprisingly, the conversation about the iTV gave way into talk about the rumored iWatch. And without hesitation, Kara Swisher asked the CEO “Google Glass, what’s your take on it?” His response was:

“There are some positives in the product. It’s probably likely to appeal to certain vertical markets. The likelihood that it has broad appeals is hard to see.

I think wearables is incredibly interesting. It could be a profound area.”

Cook then pointed to his Nike Fuelband fitness bracelet, which he says he loves (don’t forget, he’s on Nike’s board of directors), but noted that the current selection of wearable smart devices is extremely limited.

“There are lots of gadgets in the space. I would say that the ones that are doing more than one thing, there’s nothing great out there that I’ve seen. Nothing that’s going to convince a kid that’s never worn glasses or a band or a watch or whatever to wear one. At least I haven’t seen it. So there’s lots of things to solve in this space.

It’s an area that’s ripe for exploration, it’s ripe for us to get excited about. Lots of companies will play in this space.”

While he wouldn’t answer a direct question regarding Apple’s plans to enter the wearable computer space, Cook did say that it was a “very important branch of the tree.” He doesn’t seem to like glasses though, and thinks watches are a thing of the past.

“I’m interested in a great product. I wear glasses because I have to. I don’t know a lot of people who wear them because they don’t have to. I think from a mainstream point of view, glasses are risky.

To convince people they have to wear something, it has to be incredible. If we asked a room of 20-year olds to stand up if they’re wearing a watch, I don’t think anyone would stand up.”

On the future of iOS and iPhone

After getting stonewalled on a few more iWatch questions, Walt and Kara moved the conversation to Apple’s plans for the future of its iPhone and iPad. “Let’s talk about the iPad and the iPhone — when are you changing it up?” Obviously, Cook didn’t have a concrete answer.

“What’s new, what’s coming, what’s next, when is it coming. I’m not going to answer those, but we have a developer conference in less than two weeks, and we’ll be rolling out the future of iOS and OS X, and we’re super excited to do that.”

“The new iOS, is that what Jony Ive has been working on?” Walt asked.

“Yes. What we did last fall was change things up — to really ramp up our innovation. The key in the post-PC era for having a great product is incredible hardware, incredible software, and incredible services, and to combine them so you can’t tell what’s what. The magic is at the intersection.

So what we did was amp it up. We recognized that Jony had contributed significantly to the look and feel of Apple over many many years, and he could do that for our software as well.

The whole concept is to tighten the groups even more, so we could spend more time finding magic at the intersection. Now it’s seven months later, and I think it’s been an incredible change.”

As most of you know, rumors have been running rampant in recent weeks that Jony Ive has been leading a major overhaul in iOS 7. There’s also been talk of Apple working on a budget iPhone. Walt wondered why Apple expanded the iPod line, but hasn’t done that with the iPhone yet.

“We haven’t so far. That doesn’t shut out the future. It takes a lot of really hard work to do a phone when you manage the hardware and software and services in it. We’ve put our focused on doing that right. We haven’t been focused on working multiple lines.”

Does that mean Apple is working on larger-screened iPhones as well?

” At a macro level, a large screen today comes with a lot of tradeoffs. When you look at the size, but they also look at things like do the photos show the proper color? The white balance, the reflectivity, battery life. The longevity of the display. There are a bunch of things that are very important. What our customers want is for us to weigh those and come out with a decision. At this point we think the Retina Display is the best.

In a hypothetical world where those tradeoffs didn’t exist, you could see a bigger screen as a differentiator.”

And here’s few video clips from tonight’s interview. I’m sure the full video will be posted soon.

And that was pretty much it for the really exciting stuff. The three of them went on to talk about Apple’s recent dealings with the senate panel over its offshore tax practices, and its stance on ‘opened’ vs. ‘closed.’ And then they wrapped up by fielding questions from the audience

Stay tuned to iDB for more highlights and commentary from tonight’s talk.