As I reported earlier this morning, Apple today squared off with the United States Department of Justice (DoJ) in a Manhattan courtroom in a “bizzare” case (Tim Cook’s words, not mine) that some watchers say will set the rules for Internet commerce. Here’s what both sides emphasized in their opening statements, including an upcoming testimony by Apple’s Internet services lead Eddy Cue…

CNET passes along an 81-slide deck of the government’s opening statements against Apple, here are the highlights.

• The DOJ says Apple in 2010 teamed up with five U.S. publishers ahead of the 2010 launch of the iPad and iBookstore to form a cartel of sorts to raise e-book prices.
• All five publishers settled with the DoJ, leaving Apple the lone holdout in the case.
• Cout evidence includes the much talked-about e-mail exchange between publishing executives and then Apple CEO Steve Jobs, pullouts from Walter Isaacson’s Steve Jobs bio book, ‘before’ and ‘after’ sales charts and explanations of how the publishing industry works.
• Apple CEO Tim Cook called the case “bizzare” during his D11 talk and reafirmed his company intends to fight DoJ’s allegations rather than settle. 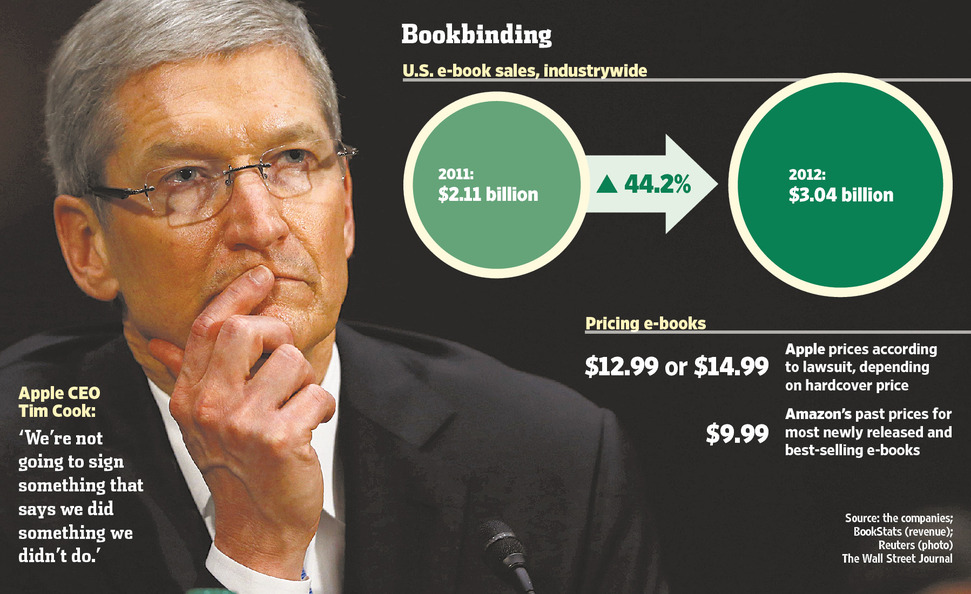 Image via The Wall Street Journal.

The trial is expected to run about three weeks.

Here’s a handy timeline of the case. 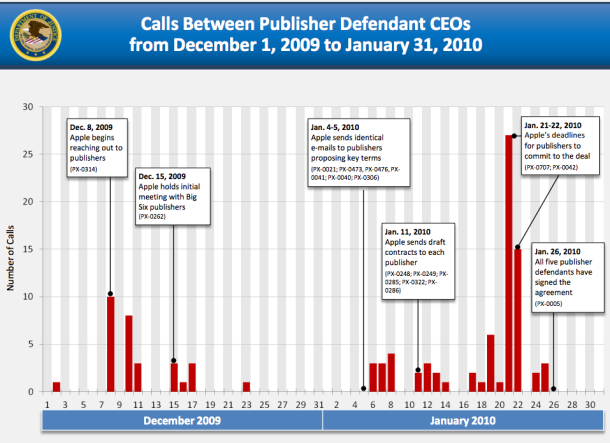 Per Reuters, a U.S. government lawyer said the alleged cartel cost consumers “hundreds of millions of dollars” because “Apple told publishers that Apple – and only Apple – could get prices up in their industry”.

To get you up to speed, agency model means Apple gives publishers the freedom to set their own prices on iBookstore as long as they agree to Apple’s customary 30 percent cut and promise not to undercut iBookstore prices on competing e-book stores, such as Amazon’s Kindle store.

The latter requirement, known as a most-favored clause, is a common practice in other industries. For example, record labels and Hollywood majors have the same clause in their agreements with retailers.

Check out the full deck, embedded below as a Scribd document.

Philip Elmer-DeWitt notes in a Forbes article that Eddy Cue, Apple’s vice president for Internet services and Steve Jobs’ key man in the negotiations with publishers, has emerged as the key witness for both sides.

Apple’s lead attorney Orin Snyder said Cue was just trying to break into a crowded e-book market by replicating Apple’s approach with the iTunes Store and the App Store.

He said “Apple should be applauded, not condemned” because those innovations poured billions of dollars into the U.S. economy.

The Wall Street Journal has more:

Mr. Snyder accused the government of making “sinister inferences” about Apple’s motives from snippets of emails while ignoring evidence that the company fought hard with the publishers in negotiations.

The government argues the contract provision “all but assured publishers would beg off the wholesale model,” in order to avoid having to match lower prices and absorb the margin loss.

Cue is scheduled to testify on June 13.

Another key witness: Penguin Group CEO David Shanks, who once called Apple “the facilitator and go between” for the publishing companies.

Instead, good ol’ Uncle Sam is seeking an “order barring Apple from anticompetitive actions, including price-fixing, in the market for digital books.”

But an eventual government victory against Apple might not affect e-book prices, as Charles E. Elder, an antitrust lawyer at Irell & Manella, explains to The New York Times:

Are consumers going to be better off as a result of any government win here? That’s going to have to be seen depending on what happens to book publishing generally. It’s in trouble, and e-books are either the savior or they’re going to hasten the demise of book publishers.

Which side do you think will prevail in this lawsuit, Apple or Uncle Sam?