Things are really starting to heat up between Apple and the US Department of Justice over this e-book price fixing scandal. The DoJ filed an antitrust lawsuit against Apple last year for allegedly conspiring with major book publishers to raise e-book prices.

And with the trial set to kick off in a few weeks, there’s beginning to be a lot of activity between the two. Yesterday, a DoJ filing popped up that called Apple out for facilitating the price fixing. And today, a potentially damning email from Steve Jobs has surfaced…

In an ‘Exhibit F’ evidence filing, the Department of Justice points to an excerpt from an email, sent from Steve Jobs to James Murdoch of News Corporation, as proof of Apple’s guilt in the e-book scandal. Murdoch’s News Corp. owns HarperCollins publishing.

The DoJ claims that this is clear evidence that Apple conspired with HarperCollins and other publishing companies to raise e-book prices and undermine Amazon’s $9.99 e-book pricing model. But as it turns out, this excerpt was taken completely out of context.

AllThingsD has gotten its hands on the full Jobs email: 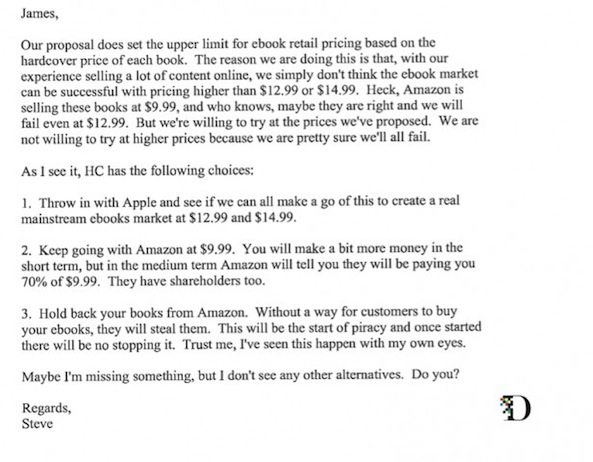 Admittedly, the tone of the letter is a bit heavy-handed—that’s just how Jobs negotiated. But if you read the whole thing, it doesn’t really sound like the then-CEO is trying to orchestrate some master plan to screw over the e-book industry. He just wants a piece of it.

Obviously, though, the Justice Department has a lot more evidence than this email. And with all of the major publishers opting to make expensive settlements with the DoJ, instead of fighting them in court, Apple’s legal team certainly has their work cut out for them.

The last we heard, the trial was scheduled to start on June 3rd. And you can bet a lot of people are going to be watching this one, because its outcome will more than likely reshape the e-book market.