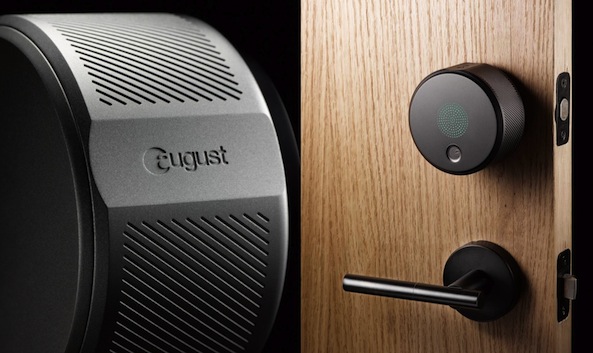 Well known designer and Chief Creative Officer of Jawbone, Yves Behar, gave the world a preview of his next big venture last night. It’s called ‘August,’ and it’s an iPhone-connected digital lock system that promises to change the way we open doors.

Now, Internet-enabled smart locks aren’t anything new. But what the August brings to the table is a sleek design—which was fashioned by Behar (who designed the Jambox, Up)—and superior functionality. Think of it as the Nest for door locks…

Just as the Nest replaces your average thermostat, the August takes the place of your existing deadbolt lock. The basic installation involves taking out two screws and replacing your current interior lock turn (not the actual mechanism) with the new unit.

Once installed, you can do everything you’d expect from a smart lock. August connects to your iPhone via Bluetooth, and from there you can lock and unlock it. You can also issue virtual keys to friends and family with time limits and other restrictions.

Also worth noting is the fact that the lock is powered by batteries. That means that depending on your usage, you could have to swap them out every 6-12 months. It also means it won’t be affected by a power outage. And yes, it has a conventional key slot.

A launch date hasn’t been set yet, but August will cost you $199 when it becomes available. That’s a bit pricey for me, and I’m not thrilled about having to swap batteries on an annual basis, but there’s a lot of cool stuff here. I can’t wait for this to come out.

You can reserve one now by clicking here.

What are your thoughts on August?