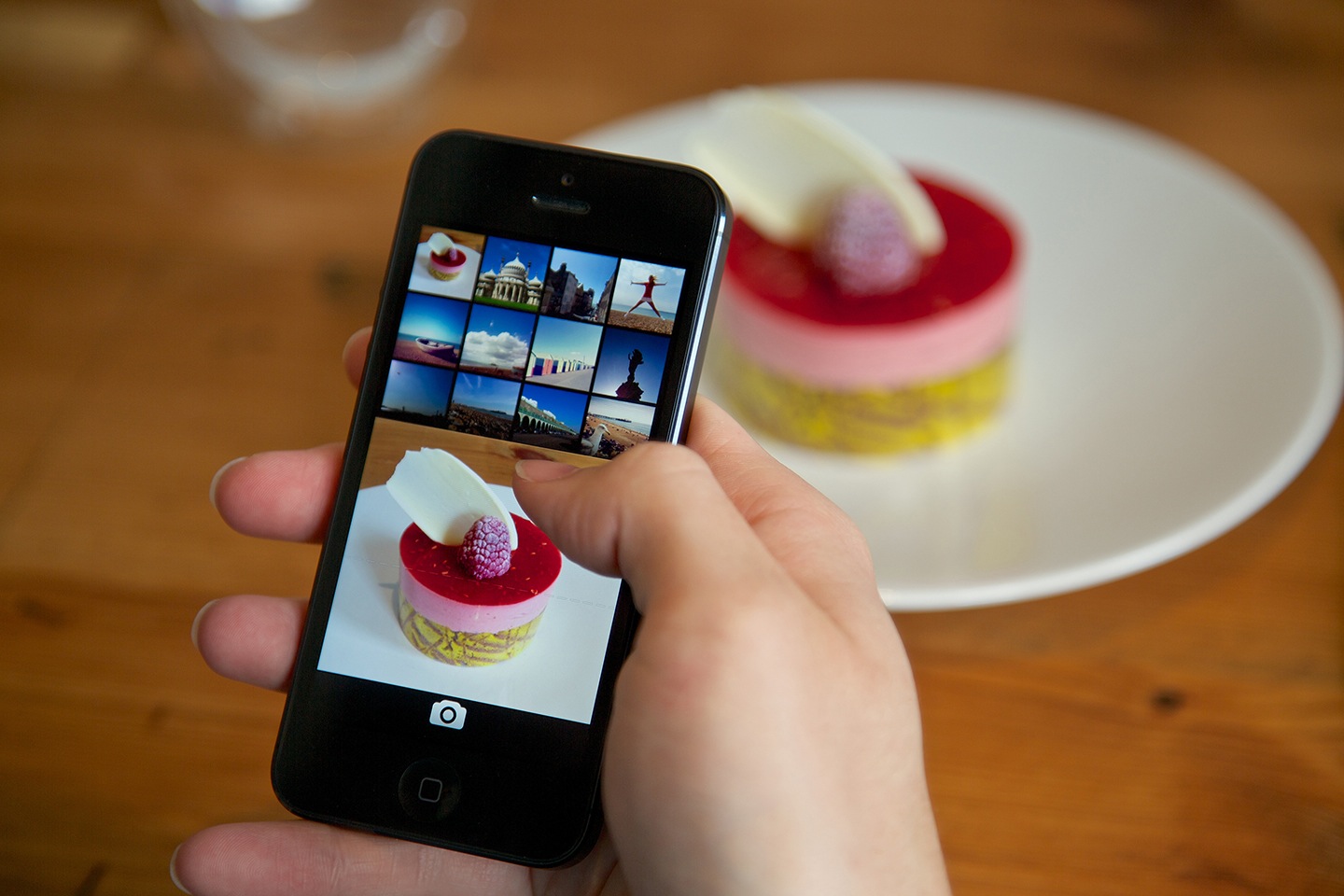 Drawing from Analog Camera for the Mac and the company’s user interface skills honed developing the popular Clear to-do software, this brand new iPhone photography app gets rid of the clutter to focus on just a few barebone features.

But even though its undisputedly polished and effective interface signals an interesting new direction for iPhone photography software, is less really more in the case of Analog Camera? Read on for the full review…

As noted in my preview article, Analog Camera is gesturally driven camera app which effectively gets rid of the many advanced capabilities found in Camera+ (still my favorite), Camera Awesome and similar photography apps.

What you’re left with is a set of basic features that, coupled with Clear-like sounds and the elegant UI, make for a pleasing experience for novice users who want to jump straight into the action without having to learn complicated gestures and fumble with settings and a bunch of buttons.

I love how Analog Camera lets me take shots in rapid succession, with the satisfyingly ascending tones as I snap a sequence of photos.

Instead, as seen below, your last four photos are always visible behind the camera interface along the top of the screen. You can tap these to select them with the camera open.

To bring up your Camera Roll, just swipe the interface down – boom, you’re in your image library now. From there, swiping left takes you to your Photo Stream. Tapping the little camera icon at the bottom takes you back to taking photos.

This is an effective, natural and arguably the fastest way to switch between your camera and photo library, one somewhat resembling Facebook’s sleek Camera app. There are three camera modes to choose from, including handy manual exposure and focus controls.

Switch to manual mode is as easy as tapping anywhere with two fingers, which brings up a pair of draggable controls for setting exposure levels and focus independently of each other. Tap again with one finger to switch back to combined exposure and focus. 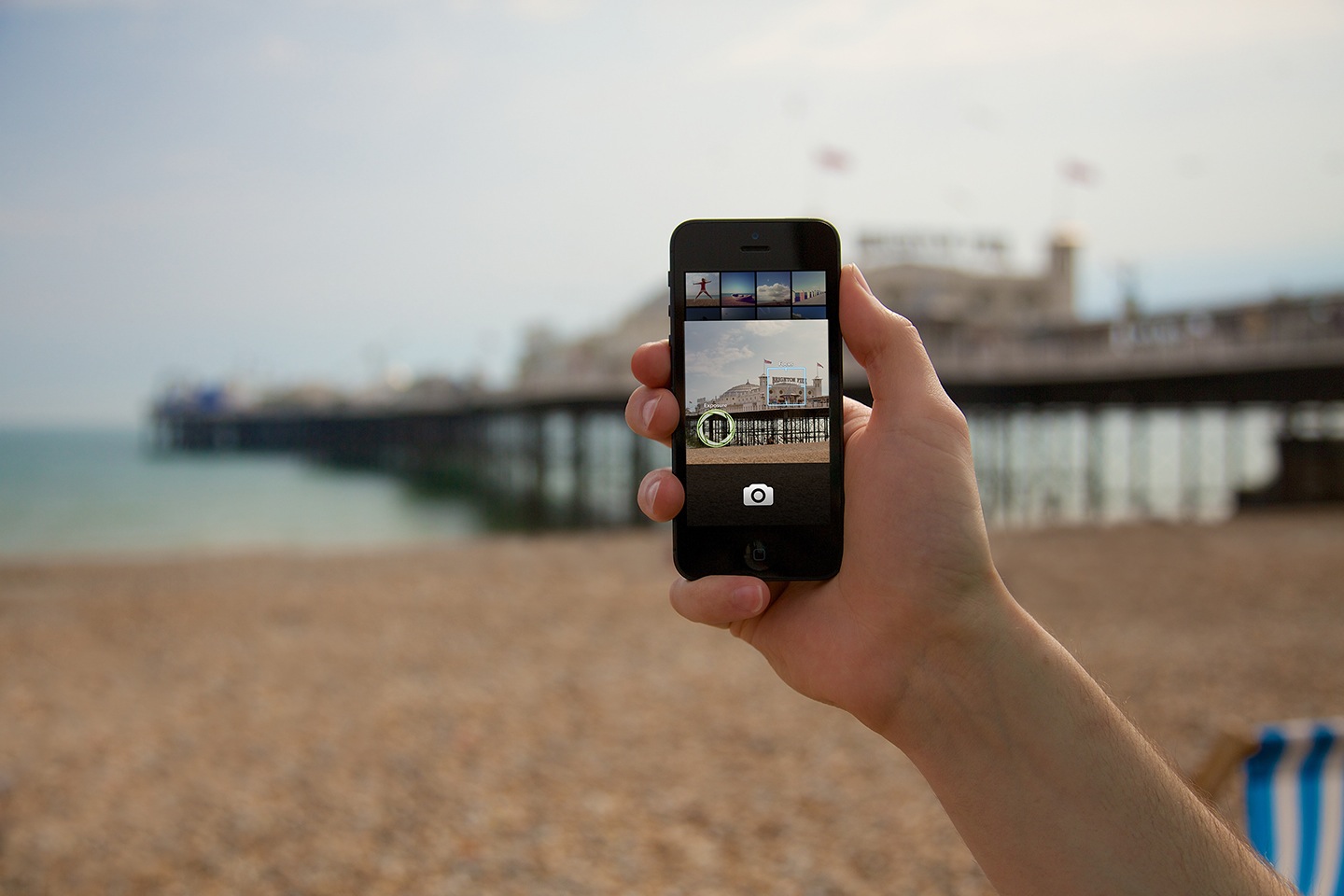 To access the fully automated tap-to-focus mode, double tap anywhere on the screen. Note that Analog Camera will always start in this mode. Perhaps the biggest disappointment of all: Analog Camera only takes square format photos.

That may be useful for Instagram, but leaves a lot of people who prefer normal aspect ratio images out in the cold. When importing a non-square photo from your Camera Roll, the app will ask you to crop the image using pinch to zoom and double tap to zoom, just like Instagram.

I instantly fell in love with Analog Camera’s minimalist and uncluttered design, but I’m afraid it’s also its biggest downfall, which I’ll speak of a bit later.

There’s some good news and bad news in terms of photo editing capabilities.

The good news is, Analog Camera’s filters interface is not only awesome, but incredibly fun to use. Upon snapping u photo or importing an image from your Camera Roll, the app lays out a grid of eight filter thumbnails (plus a non-filtered setting) with live previews of your image. 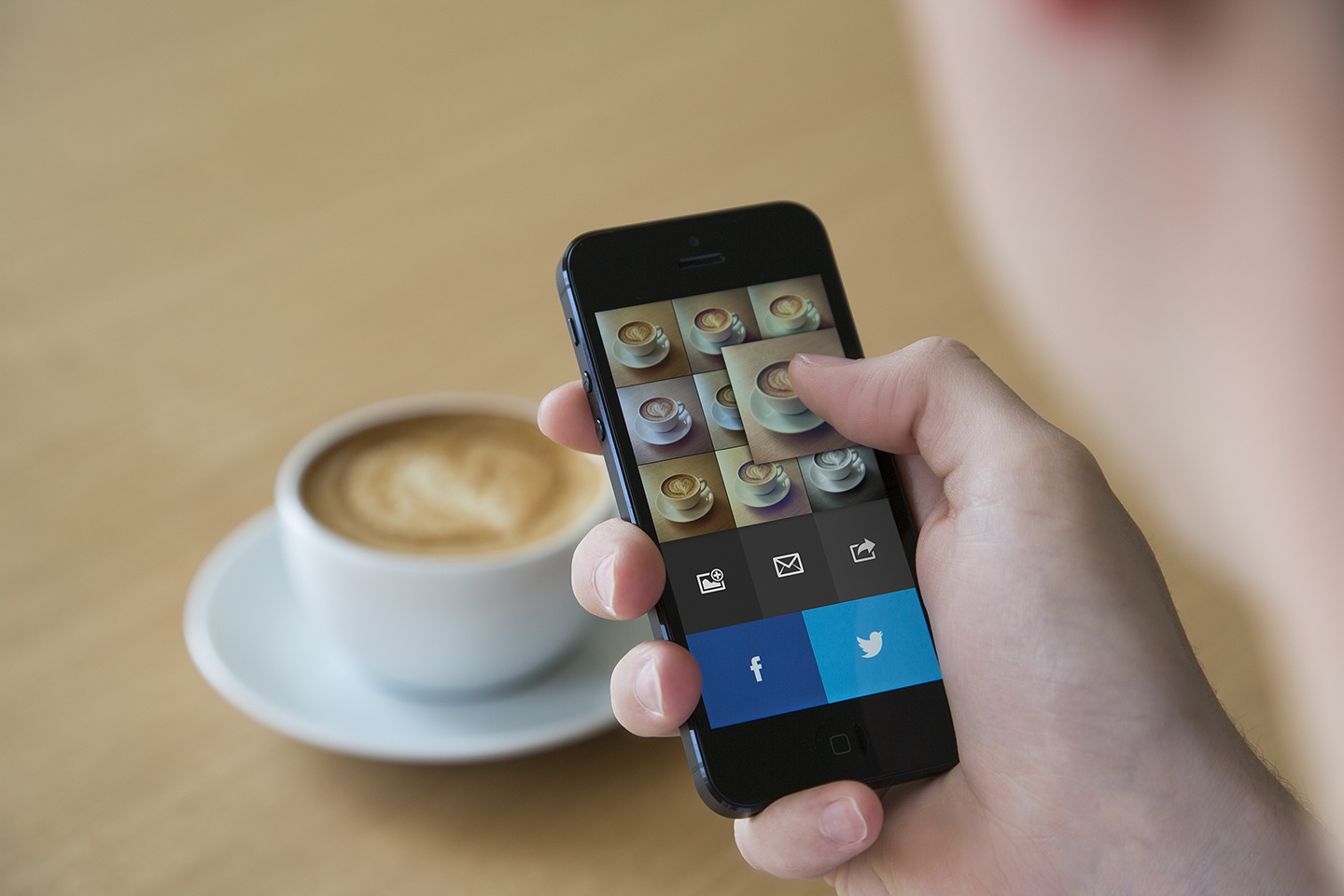 To apply an effect, just tap on the corresponding thumbnail.

The processed image immediately zooms into view, letting you share it using large buttons sitting in the lower half of the screen. To dismiss the effect and choose another one, just tap on the enlarged preview.

Even better, you can quickly skim through live previews by tapping and holding on any thumbnail until it pops out and then dragging your finger across the previews.

As for the bad news, there are only eight filters to choose from (Camden, Superior, Marble Arch, Brunswick,  Pavilion, Honeycomb, 1978 and Inky), which pales in comparison with other photography apps that sometimes pack in a few dozen effects. 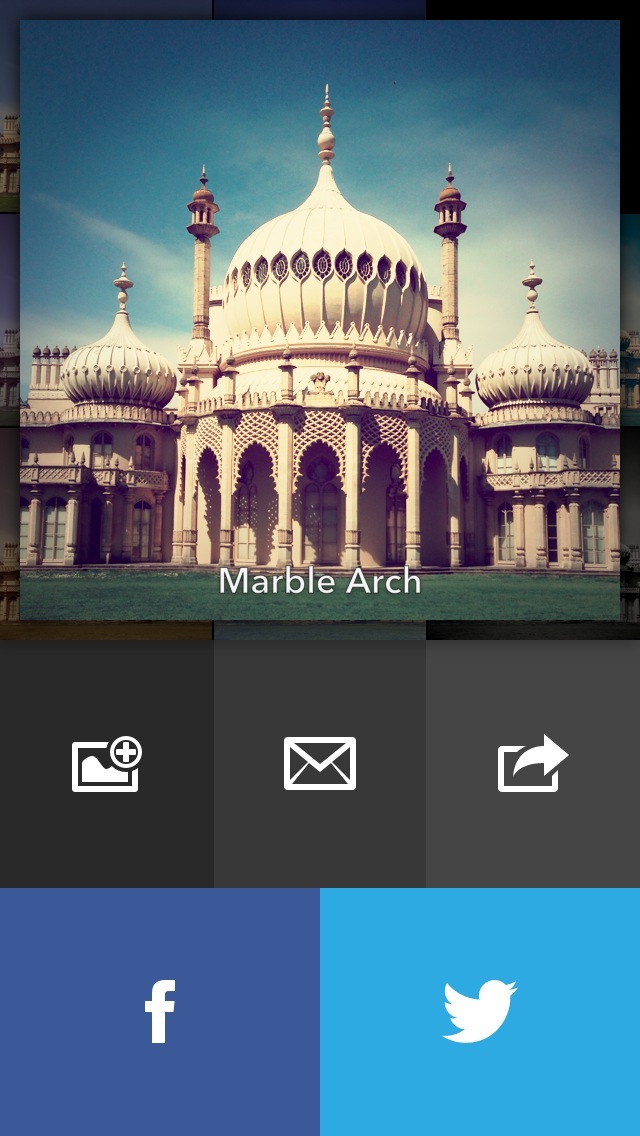 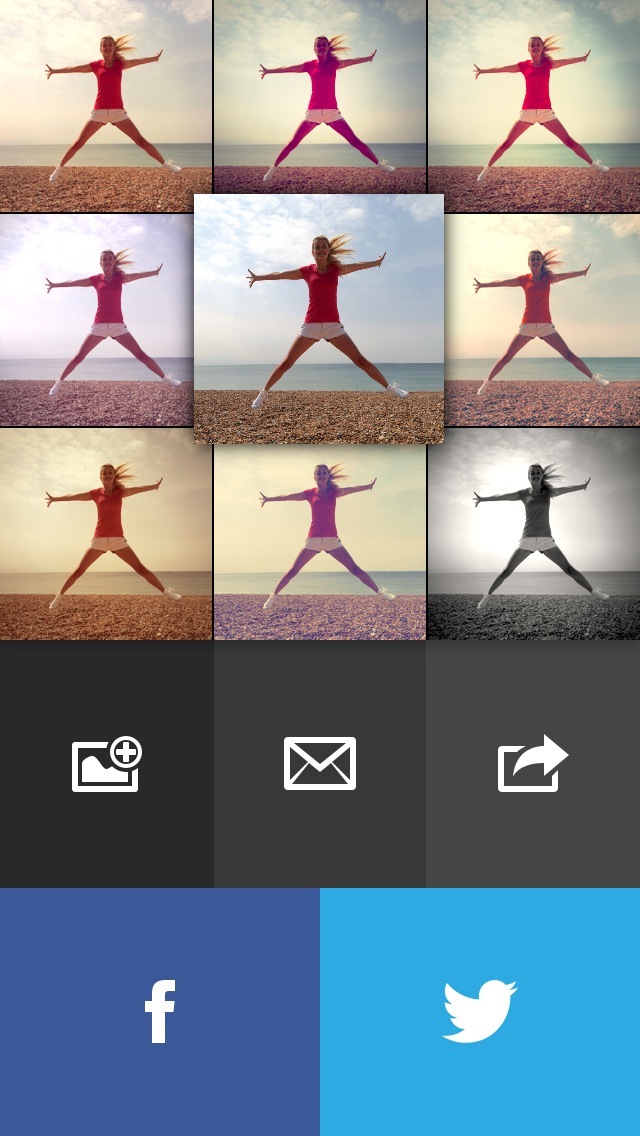 Even though the filters are top-notch, it’s worrying that you can’t customize the intensity and other values as there are no sliders to change filter parameters – and that’s quite a bummer, at least from my vantage point.

Hopefully, this is something that will get sorted out ASAP because lack of any customization means you’ll left with an Instagram-y experience where even an untrained eye can quickly realize you’ve touched up the photos using Analog Camera.

If Analog Camera wants to replicate the Instagram experience, that’s OK with me – but in this case it’s that much harder to justify its asking price compared to the free Instagram app.

You also can’t layer effects on top of each other, which could be another handy addition.

Sharing in Analog Camera is incredibly frictionless thanks to a dedicated interface that occupies the lower half of the screen. This lets you quickly share any photo, right after applying a filter, just by tapping on the tiles with Facebook and Twitter logos on them.

Therefore, if you’ve previously set up these accounts in your device’s Settings, you won’t have to re-authorize the app with these services. By the way, I’m still stoked by how many App Store apps don’t implement native iOS sharing and instead forward me to a Twitter and Facebook login page. 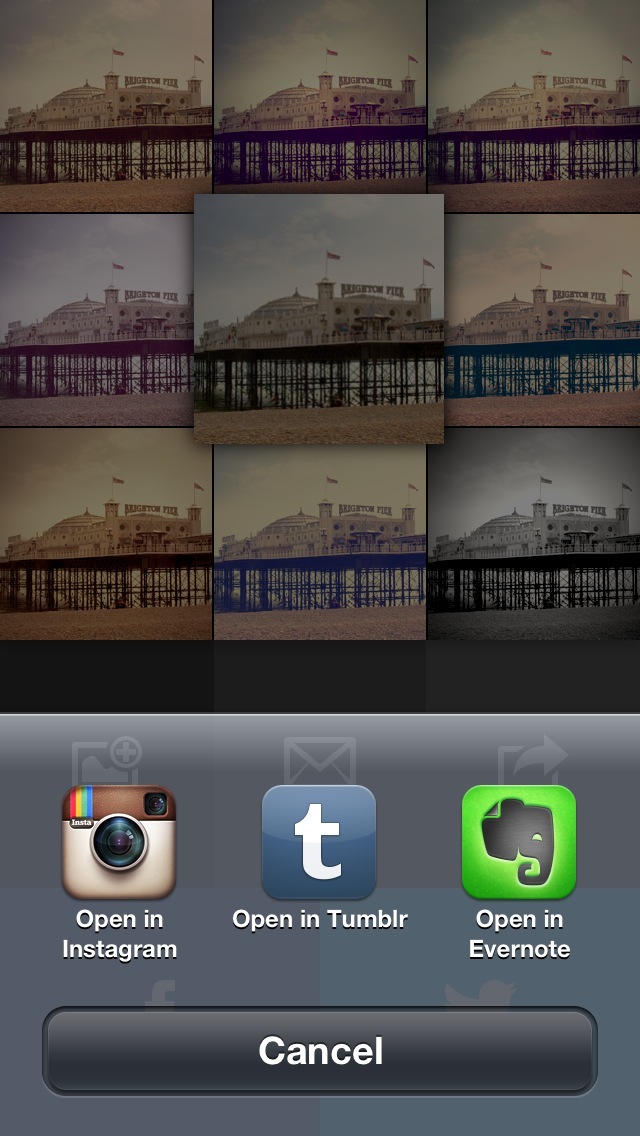 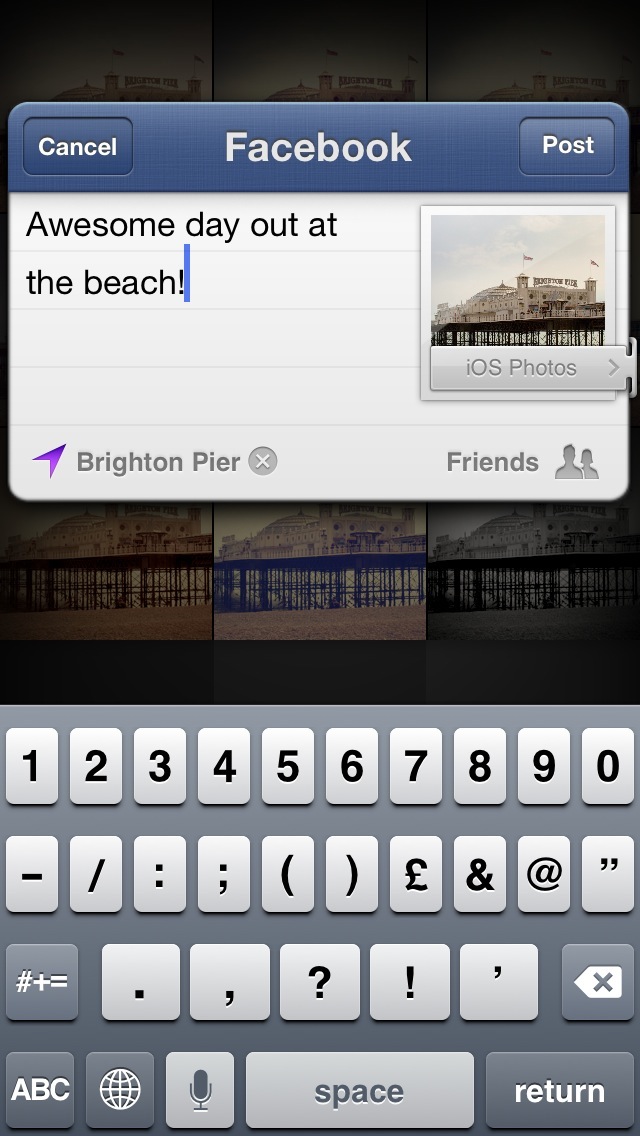 You can send images to other apps using the ‘Open In’ feature of iOS (left) and share to Twitter, Facebook, Sina Weibo and via email (right).

Just above the Facebook/Sharing tiles are three gray buttons that let you export an image to the Camera Roll, attach it to an email message or send your processed photo to apps such as Instagram and Path via standard iOS 6 ‘Open In’ interface.

By the way, it’s definitely confusing that the ‘Open In’ option is depicted with the share button which in other apps normally brings up a sheet with all available sharing capabilities (Facebook, Twitter, iMessage, Email, etc.).

I’d definitely re-think this button in order to avoid any confusion.

I also would have liked additional sharing options. In addition to Google+, developers should definitely consider adding sharing to Flickr and iMessage. 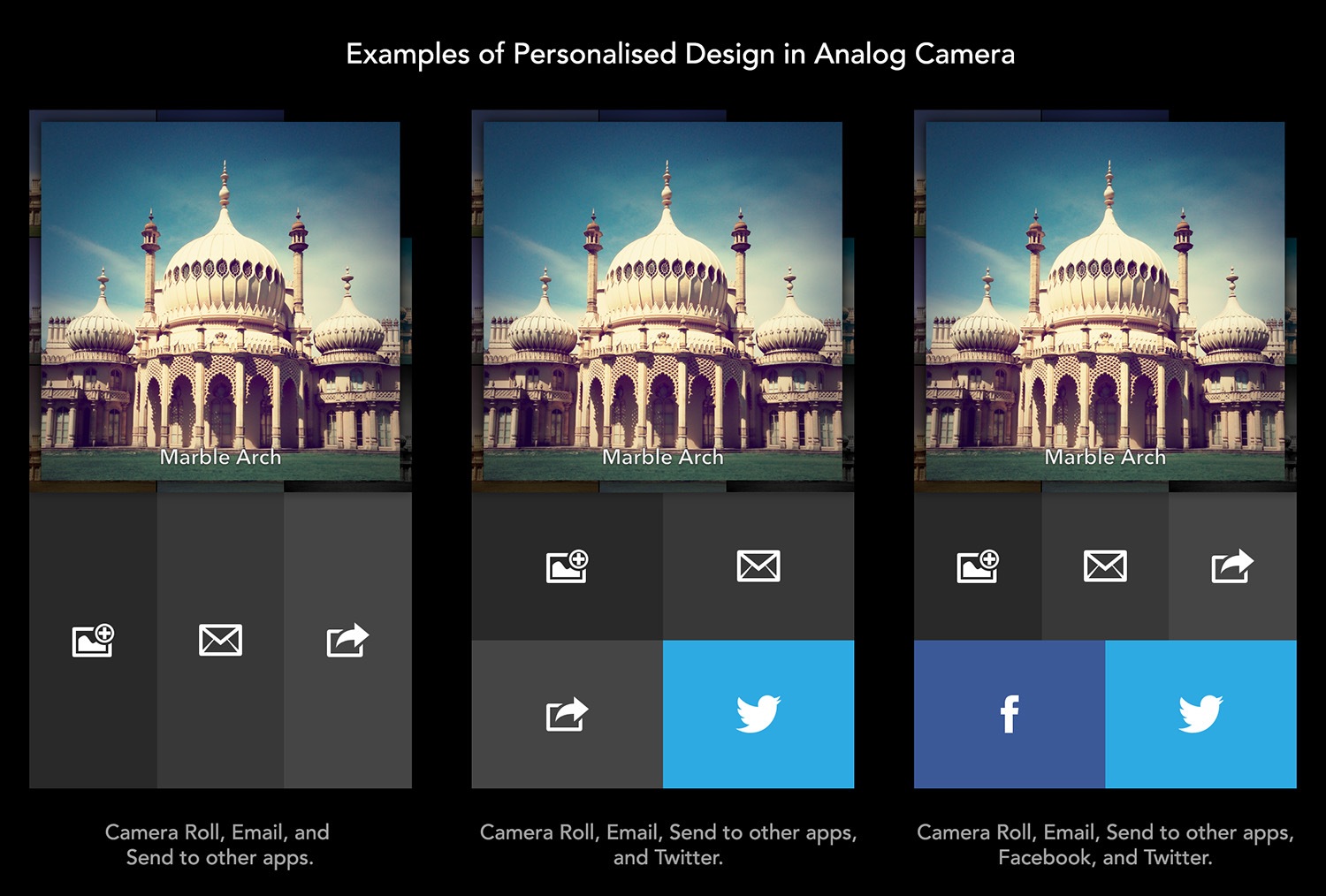 On a surprising note, Analog Camera’s interface automatically changes its layout based on the sharing services you’ve enabled on your device, as pictured above.

Unfortunately, Analog Camera doesn’t have any kind of the settings interface.

Now, I get it that developers wanted to create a simple app that ‘just works,’ but come on, limited customization options would have been more than welcomed.

I also would prefer an option to have Analog Camera use a lightbox of sorts, like Camera+ does. This would let me choose to store all the shots inside the app’s private storage rather than populate the Camera Roll, unless told otherwise.

Most annoyingly, you can’t turn off Clear-like interface sounds that are convincingly cute, but get old fast. Another huge omission: Analog Camera doesn’t work with Camera Roll albums, which I hope is an oversight that will get fixed in the next update.

In fact, there’s no way to access anything else but your Camera Roll and Photo Stream and the app doesn’t support popular cloud services like Dropbox, SkyDrive, Google Drive and others.

In terms of camera features, you can’t enable the full 3×3 grid – there’s only the basic horizon level – which is essential for unleashing the power of the Rule of Thirds.

Moreover, there’s no way to change image quality or turn off geotagging. While none of these omissions is a deal breaker, combined they certainly add up to the feeling that Analog Camera in certain aspects feels half-baked. 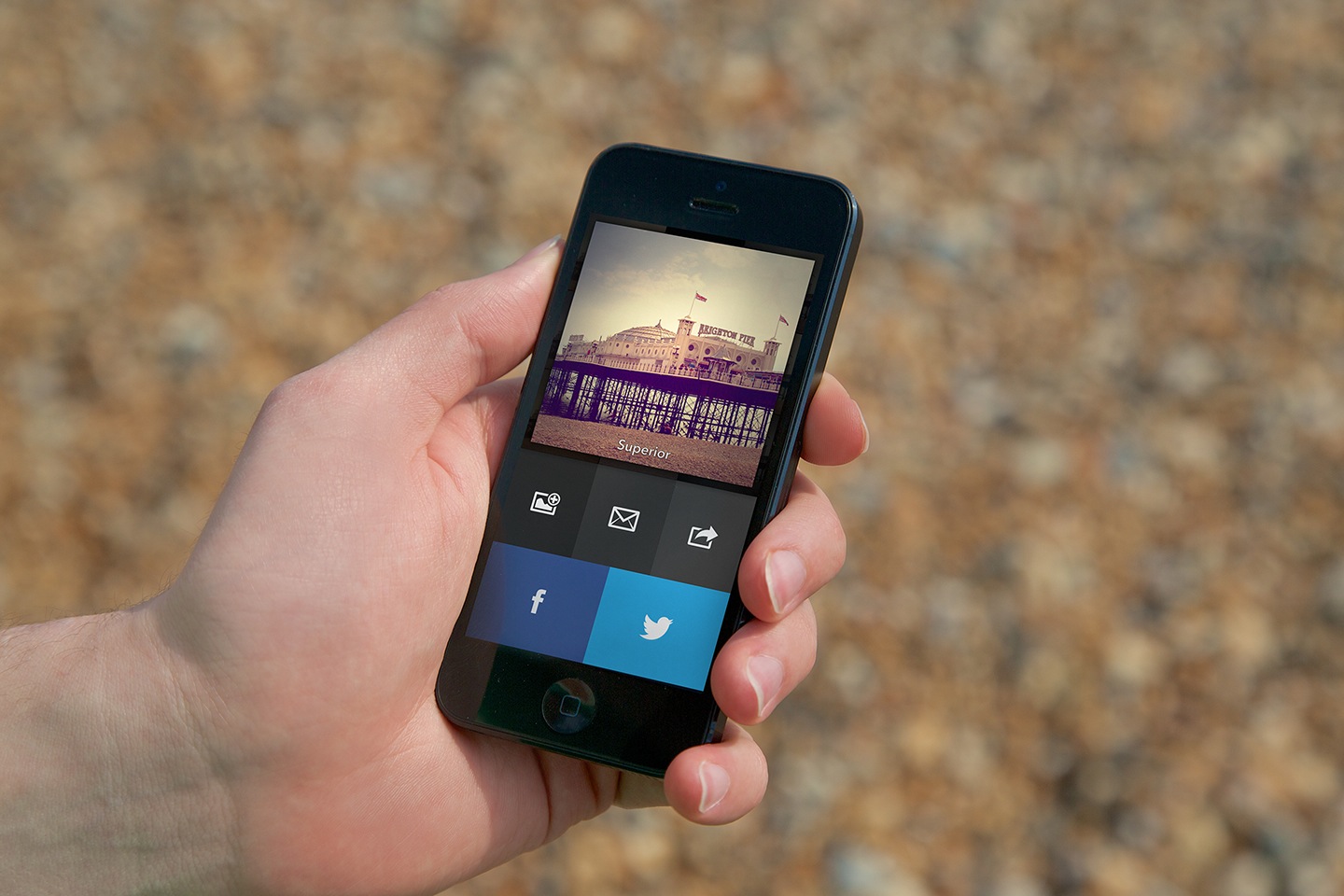 The app at the moment doesn’t integrate with Analog for Mac, a $9.99 download, but developers said the Mac app will gain eight filters from Analog Camera in June 2013.

Analog Camera’s fluid interface and subtle animations indeed make other photography apps feel mundane, but I have a few gripes with the software.

While the program is arguably the fastest and easiest way to take, process and share photos, its lack of settings, the inexplicable insistence on square images and only eight filters that can’t be customized will likely disappoint avid photography fans. 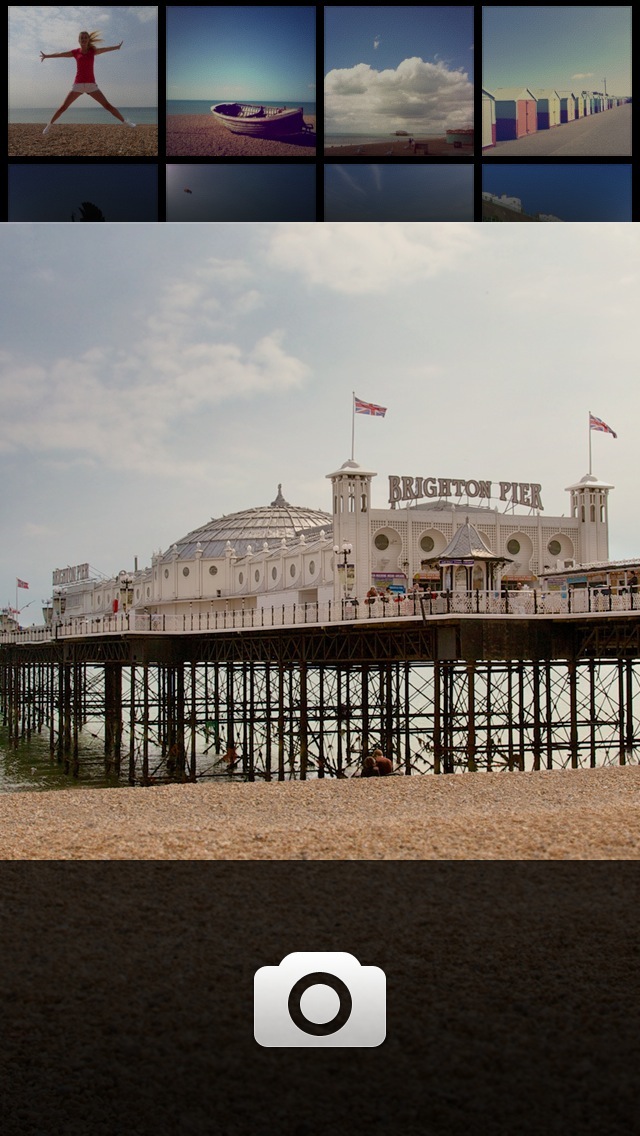 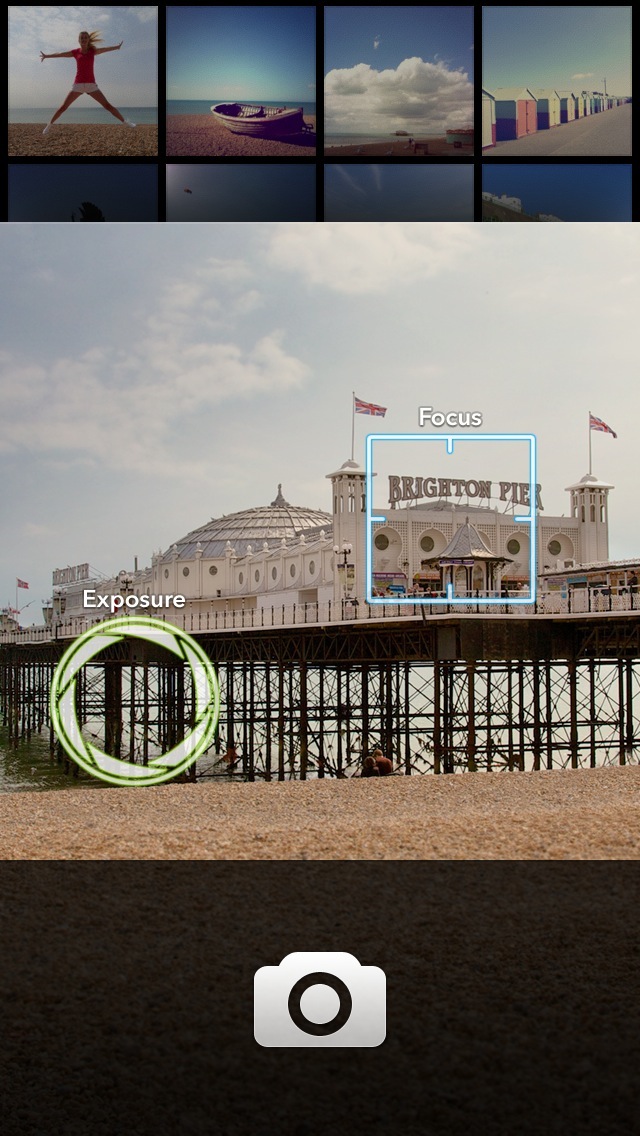 That said, Analog Camera is more than a decent 1.0 release. I’m sure it will get better as the team adds to the experience in future updates – they have some great principles in place so it shouldn’t be a problem.

Analog Camera for the iPhone and iPod touch is available for 99 cents from the App Store and requires iOS 6.0 or newer.