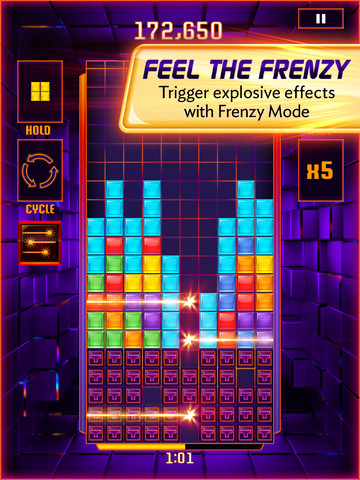 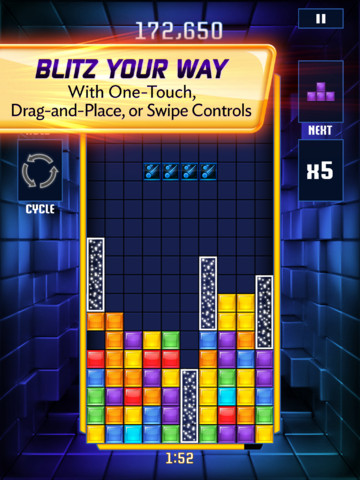 Electronic Arts’ mobile gaming arm today released a new (and free) game for iOS and Android devices, Tetris Blitz. Announced in mid-February, it’s a twist on the block-dropping Tetris puzzler rather than a remake of the original game. The game actually landed on the Canada App Store a week ago in a soft-launch manner, but today rolled out across App Stores globally. Trust me, this one’s worth a download. Besides, you can’t really go wrong with a high-profile release costing zero bucks, now can you?

Race against the clock in a two-minute blitz to clear lines and rack up as many points as possible before time runs out! With all-new features, stunning visuals, and innovative controls, this twist on the world-famous puzzle game is a must-have on mobile.

The graphics and visual effects sure look awesome. 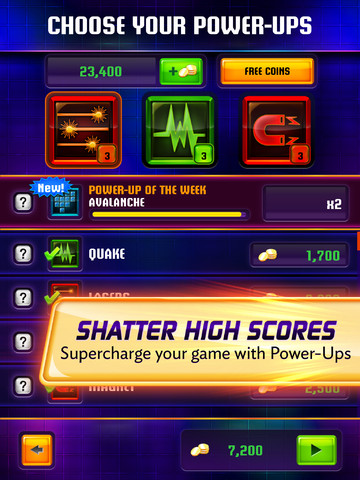 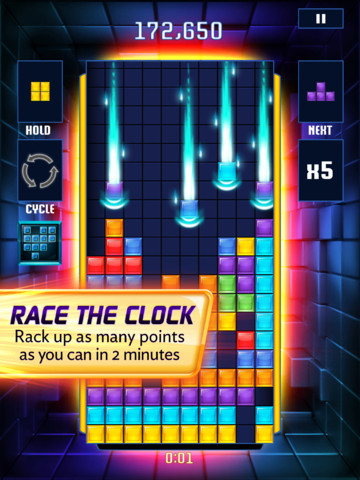 Those are iPad screenies, by the way.

Tetris is one of those timeless games that I’ll always return to, over and over again.

Keeping that in mind, Tetris Blitz is purely addictive and downright fun.

I love drag-and-place touch controls, though fans of the original game can switch to one-touch or swipe retro placement. There’s enough power ups like magnet, laser and time shift to keep newcomers glued to their screens and Electronic Arts is promising a new power-up every week.

The Frenzy mode lets you double your points (hint: clear lines back-to-back to stay in Frenzy and get blown away by stunning cascades that keep the points rolling in) and later compare your score to your friends on the Facebook leaderboards.

The Frenzy mode will be especially appealing to older gamers who remember the awesome Twintris, another take on the Tetris formula that had been hugely popular among Amiga gamers some twenty years ago.

Being a free-to-play release, Tetris Blitz counts on in-app purchases (God, am I beginning to hate those), but there’s no reason to panic as the game doesn’t ask for cash constantly like some other releases (hint: Gameloft’s Dungeon Hunter 4).

In other words, you’ll be able to enjoy Tetris Blitz without spending a dime. 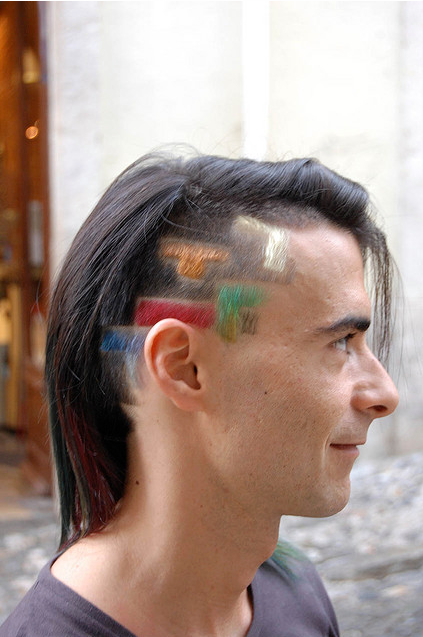 Additional details can be found over at the official web site.

Are you a Tetris addict?