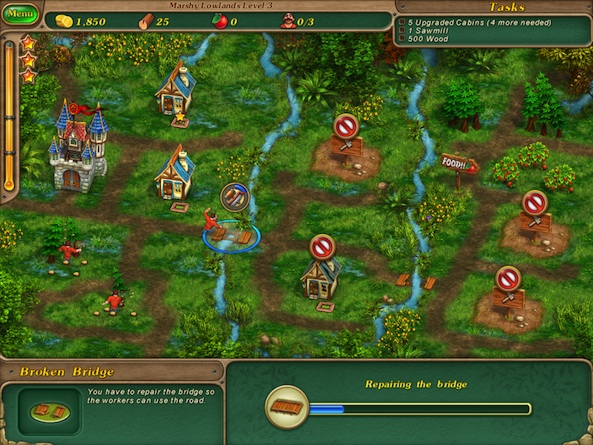 I secretly love time management games. I know they are silly. I should be spending my time mining asteroids or building empires. But, I can’t help but love watching those funny little men run around fixing things at my behest in the fastest possible time.

Royal Envoy 2 HD (Premium) is the iPad-exclusive sequel to the time management game of the same name. Players must repair houses, clear roads, and make life better for townsfolk within the empire. Get it done in the fastest possible time or the King will have your hide…

The game is cartoony in design. At the beginning, players can watch a funny clip that tells the story of the game. The king has called his city planners to a meeting. The original game’s bumbling planner, Cedric, shows up late with charts and graphs that show the people in his district are living in broken houses with impassable roads. The king commissions you to go to Cedric’s district and fix the mess he has created.

Players are tasked with rebuilding broken down towns by hiring local construction workers in an early nineteenth century kingdom. Each town needs something different and, as the district’s new city planner, you must help bring peace to the land.

There are 93 different time management challenges, some of which are mini games like clearing a path through a cave or rescuing townsfolk from a fire. The first two towns and one additional mini game, totaling eight levels, come free with the download. You can unlock the rest of the game with an in-app purchase. 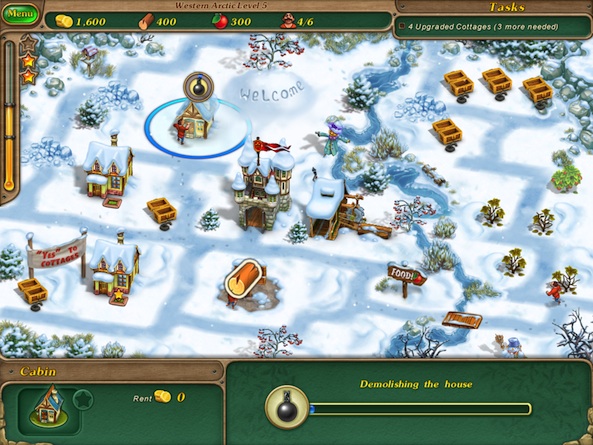 To begin your first challenge, tap the Start button. You will be given at least one task to complete. For example, you may need to build five cottages or repair two bridges. Once you tap the screen, the timer starts and you must work quickly to complete all of your missions. Most of the time, you will already have a few workers on hand to help clear paths, cut down trees, and collect food. Send all of your workers out into the town to complete as many tasks as you can.

Each task requires a certain amount of supplies. It may only take gold to build a market, but you’ll need food, wood, and workers to build cottages. Some tasks require a lot of workers, while others require more coins.

To earn more money while completing tasks, upgrade cabins and cottages. You will generate more rent income that can be used to buy food in the market, which can then be used to hire more workers.

When you tap on a tree, a worker will cut it down. Tap on a house and a worker will repair or upgrade it. Tap on a pile of rocks in the road to have it cleared away. Sometimes, things need to be done that are not on the list of tasks to be completed. For example, many times, you will need to build a sawmill so that you can produce wood to build houses. However, only the first level includes building a sawmill in the required tasks list.

When you have repaired and rebuilt a town, you will move onto the next one. The free download lets you complete two towns. However, you will have to pay to unlock the rest of the game. 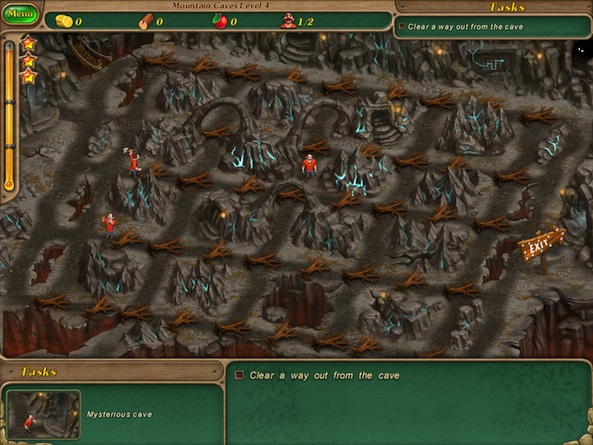 For fans of time management games, this is exactly what you’d hope it to be. There are plenty of levels to beat and you can replay them for a better score. Once you’ve unlocked the entire game, there are seven additional towns, plus mini games, to keep you entertained for a total of 93 challenges. There are also 10 secret bonus levels that you can play once you’ve completed the game. So, even when you think you are done, you are not.

Downloading the correct version of this game is confusing. There are two versions. One is just called Royal Envoy 2 HD and the other has the word “Premium” in the title. Up until last week, the premium version was $6.99. However, now the game is free to download, but it costs $4.99 to unlock the full game. The non-premium version is also free to download, but costs $6.99 to unlock. I downloaded both games to see why they are different prices. There is no difference between the two games. So, I suggest downloading the premium one since it costs two dollars less.

Although the first two cities are free to play, you will have to pay $4.99 to unlock the entire game. This is a great price for a game that offers so many fun time management levels. If you take into account the fact that the computer version of the exact same game costs $13.99 on Big Fish Games, you are talking about a real bargain with this iOS version.

If you like time management games, this one is the perfect fit for you. You’ll be tasked with sending workers out to build bridges, clear roads, repair houses, and collect supplies. It reminds me a lot of Roads of Rome. You’ll also be able to compete in snowball fights, rescue locals from volcano eruptions, and turn a run-down empire into a thriving metropolis. The first two cities are free to download, but you can unlock the entire game for only $4.99 through an in-app purchase. Download Royal Envoy 2 HD (Premium) in the App Store today.