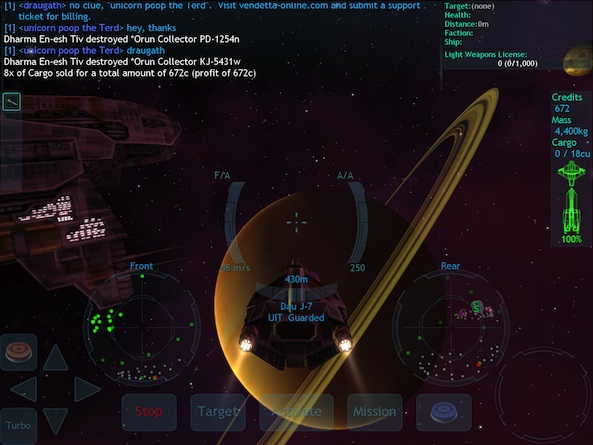 When I got my hands on an iPad more than three years ago, the first thing that crossed my mind was how to get World of Warcraft onto it. Even though Apple has improved the gaming capabilities of their tablet, Massively Multiplayer Online (MMO) game developers, like Blizzard, tend to steer clear of the platform, somewhat of a disappointment for a decade-long fan of the epic fantasy game.

Lucky for fans of space-themed player-versus-player (PVP) MMO gaming, Vendetta Online has taken the leap into iOS and is now available on the iPad. If you are already a subscriber to the all-encompassing sci-fi game, welcome to the pocket version. If you’ve never played Vendetta Online, but fancy yourself an experienced simulation space trade and fighter, you are in for a real treat…

As soon as I opened the game, my jaw dropped. This game is intensely three-dimensional. The graphics are crisp and sharp. You feel like you could see to the end of the universe. The game is permanently covered by a translucent heads-up display (HUD) that shows all of your spaceships information, plus information about your surrounding environment, like ships in front of you and behind you.

The beginning of the game is text-heavy, but that is due to the extensive training section. The game’s theme has a military feel to it. Players must adhere to a strict set of codes until they decide to become mischievous gamers later on.

The HUD uses a simple block text that is reminiscent of sci-fi movies from the 1980s. However, the words are easy to read and not too small.

The soundtrack is perfect for the ambitiousness of this game. It is subtle, but always on. Other audio samples include the hum of the ship, the sound of weapons being fired, and plenty of space-based actions. 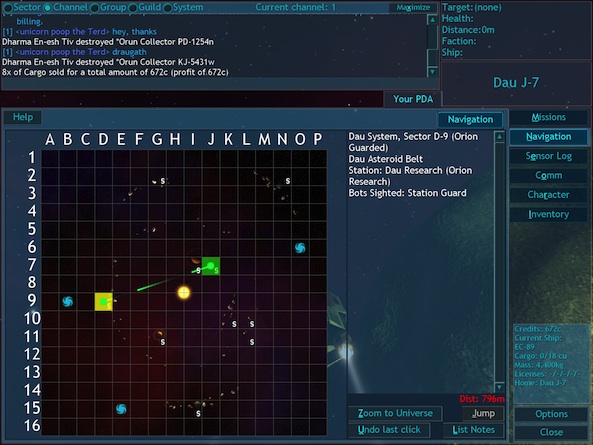 The game’s training takes hours to complete. However, I enjoyed the anonymity. As a trainee, other ships will not cause damage if they attack you. Since this is a PVP and PVNPC game, other ships will regularly attack you once you get out into the “real world.” In the training sector, you will learn how to maneuver your ship, how to target and shoot enemies, and how to complete missions.

You can select from two different types of controls. Either fly your ship using the iPad’s accelerometer or switch to joystick and virtual D-pad controls. The game recommends players start out using tilt controls because joystick controls are difficult to master.

I chose joystick controls to begin with because I hate using tilt controls on my iPad. However, I regretted my decision after a few hours into the game, when I started having to actually engage in space battles and my ship maneuvered like a pregnant yack.

I switched over to tilt controls to see if it was any better. It was not. Plus, my arms began to cramp up from having to hold my iPad in mid-air for so long.

Players can chat with each other in a variety of different chat windows. You can stay in the general chat channel, join your guild’s channel, log into your current sector channel, or add a specific chat group.

In addition to space battles, players engage in space trading with the stations. As the game progresses, missions will become more long-term and involve full-scale wars against other factions.

Ships can be upgraded and customized using in-game credits that you earn playing missions and trading metals. The better your ship is, the better chance you have in a dogfight against another player.

The things you do in the game will determine the types of missions you will encounter in the future. The better reputation you have with your local faction, a better quality of ships and add-ons will become available to you.

I didn’t even begin to scratch the surface of the game during my review period. I look forward to learning all of the different ways that I can become a major player in this space-based environment.

This game is seriously epic. It is the kind of game that could break up marriages and make strait-A students turn into basement-dwelling social outcasts. If you are brand new to the game, you can download and play it for a month for only $0.99, at which time, you will need to decide if you are going to join the ranks or walk away from the battle before you. If you want to be a part of the Vendetta Online adventure, you can extend your gameplay by adding a “Lite” subscription of $0.99 per month, or go all in and get the full membership from the company’s website.

I had a really difficult time getting used to the controls. I have not played the full desktop version of this game, so it is possible that learning the controls is part of the fun. Hopefully, as time goes by, I will either get used to the sensitivity of the ship, or the developers will have a fix to make the spacecraft more maneuverable.

I also experienced an annoying issue with having to agree to the End User License Agreement over and over again. Every time I exited the game, whether on purpose, or because my game timed out because I was idle, I had to agree to the EULA again when I logged back in. 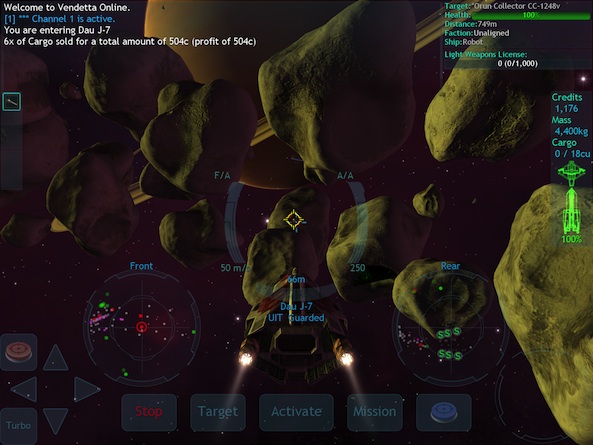 For only $0.99, you can play this epic space-themed MMO for a month. Even if you decide not to continue playing the game, the dollar download is worth every penny. If you want to play past level three, you will have to sign up for a full subscription for $9.99 per month. If you subscribe to multiple months at a time, you could reduce your monthly cost to around $7. For fans of space-based PVP battle games, this is a small price to pay for iPad-compatible gaming.

If you are already a Vendetta Online player, this is a great addition to the epic online adventure. If you are new to Vendetta Online, but have experience with space trading and battle simulation games, you should definitely check this one out. You may find it to be the best in the genre. If you don’t know what MMO, PVP, or battle simulation games are all about, this one may be above your abilities. However, at only $0.99 for the first month, it won’t cost you much to just give it a try. Maybe this is the beginning of the end of your social life.