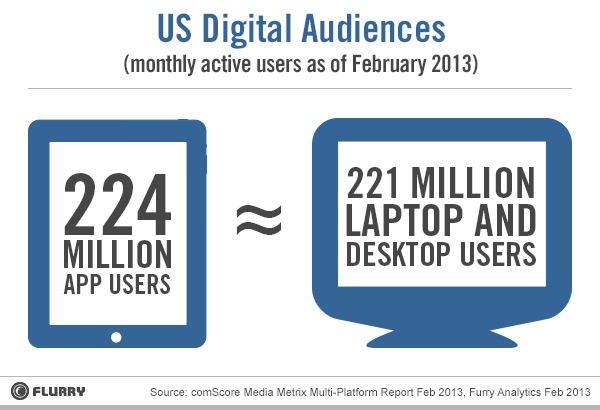 Apps (whether iOS or Android) are attracting huge audiences in the United States. Indeed, during a recent month apps attracted nearly the same number of people as used laptop and desktop to go online. What’s more, for a prime-time period during the week apps attract 52 million users, equivalent to the circulation of the top 200 weekend U.S. newspapers and three television shows, according to numbers released by a mobile analytics firm Thursday…

There were 224 million app users in February, according to Flurry Analytics.

That compares with 221 million desktop and laptop users comScore found visited the top 50 U.S. online sites during the same period. In a note on the company’s blog, marketing vice president Peter Farago wrote the audience for apps “has reached critical mass.”

Like television, apps have their own “prime time” when audiences reach a height. For apps, that period is after work, between 7pm and 10pm, according to Flurry’s survey of the top 250 iOS and Android apps.

The numbers show app usage is weakest during the wee hours of the night. Although people use apps 75 percent more often during the week than during weekends, the period of 9am to 5pm on Saturdays and Sundays remain strong. 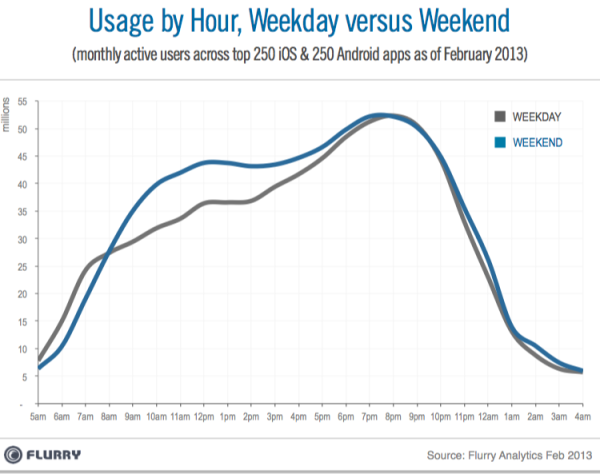 While the rise of apps and other digital media will make it more difficult for television and print, Farago concedes app usage is “highly fragmented.” Despite the proviso, Flurry noted a Morgan Stanley report showing television’s audience has fallen by 50 percent since 2002.

The idea of apps displacing television is certainly holds potential for the likes of Netflix, which is increasingly moving toward streaming its own content to tablets and smartphones. Also, if the key demographic for television networks shifts largely to apps, studios will be more open to Apple’s licensing proposals. 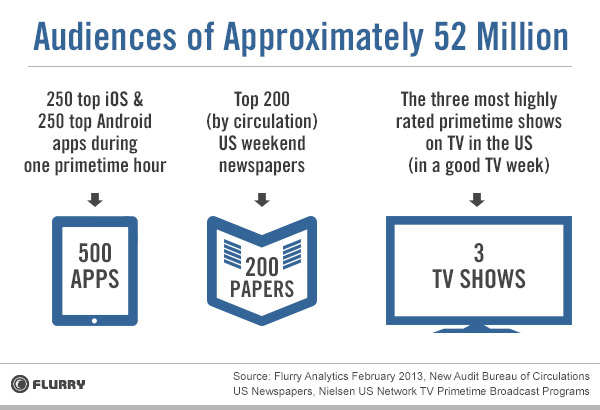 But there are some huge differences between the experience of watching TV and mobile apps. First, the U.S. is getting older so apps will need to change to attract this aging demographic. Secondly, while repeated attempts have been made, television is a passive activity, while mobile apps expect more participation.

It’s unclear whether consumers – after spending the day interacting with people at the office – will want to interact with an app. Perhaps most importantly, the mobile world is split into two basic camps: iOS and Android.

Can iOS and Android get over themselves enough to produce a unified front?

That may be the ultimate key to whether apps take the media lead.