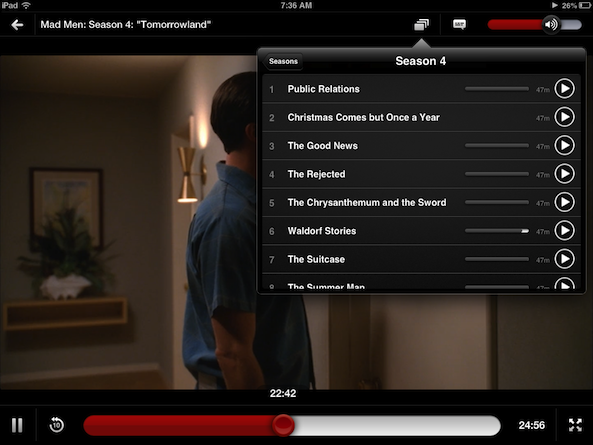 Netflix users will be happy to hear that there’s a new version of the iOS client available for download today. The update, which brings the app to version 4.0, includes a handful of new features, as well as the usual bug fixes and improvements.

Perhaps the most notable change in today’s release is the new episode selector in the iPad app. Netflix says this will make finding new TV show episodes, and discovering old favorites, much easier. You’ll find the full change log after the fold…

The list of changes may be short, but I have to say that the new episode selector for the iPad is actually pretty handy. It allows you to quickly view, and choose from, a list of episodes from the active season of a TV show while you’re watching it.

That alone is worth the download, but the revamped audio and subtitle toggles are also nice. Instead of having to open a new window to access these options, they are now available in a small popup menu that makes them much more convenient.

If you ever watch Netflix on the go—particularly on your iPad, then this update is a no-brainer. If you don’t already have the Netflix app, you can find it in the App Store, for the iPhone and iPad, for free. Keep in mind, the service is $7.99 per month.