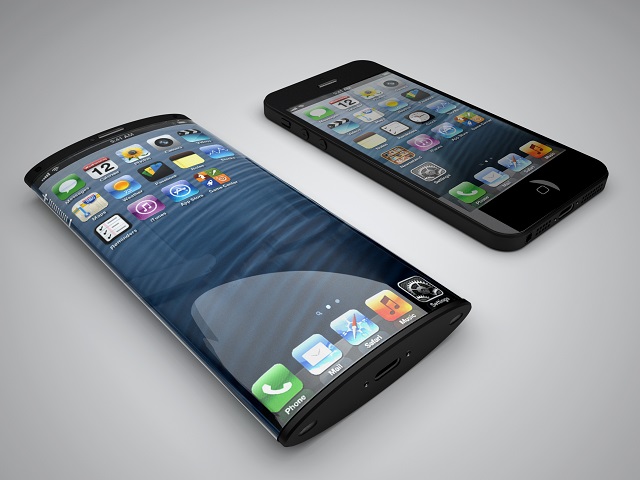 I take it you recall a recent concept render showcasing what a colorized budget iPhone might look like? You know, the one envisioning a super nice translucent polycarbonate body akin to Apple’s famous G3 iMac all-in-one lineup that helped save the firm from certain death? Concept artists Nickolay Lamm and Matteo Gianni who were behind that one are back at it and have just dreamt up a futuristic looking iPhone with a rounded body that just very slightly seems to resemble Nokia’s design language for its Lumia series…

The design duo reminds us that Apple actually envisioned curved surfaces in a patent filing from 2011 which calls for losing the iconic Home and volume buttons and use of an AMOLED display and rounded design in order to create “an illusion of depth perception” capable of “mimicking a 3D experience.”

The form factor of smartphones has not changed since 2007. However, why can’t smartphones utilize both sides of the surface rather than just one?

By the way, the New York Times reported last year that Apple was developing a curved-glass device. And people in the know claim the company had worked on a curved-glass iPhone before, but halted production due to allegedly prohibitively pricey manufacturing.

Just be careful not to take this nice (or fugly, depending on your point of view) render for granted: nobody but a tightly knit inner circle of Apple executives is privy to classified information concerning the next iPhone.

And with all the crazy rumors flying around, it’s so easy to lose perspective and start daydreaming.

As my friend Mark Gurman put it on Twitter: welcome to the Apple rumor world – Photoshopp’d renders based off of Photoshopped “leaks.”

I like this new concept, but am not sold on curved-glass cell phones.

I mean, rounded corners are one thing, but this…

Tell me again: why would I want to have my screen image bent and distorted, unless of course the curvature of the display is just barely noticeable?

On the flip side, I’m loving those touch-enabled volume up and down buttons on the side, though these wouldn’t be very practical either. Apple is unlikely to ever come out with this design and Lamm has created as sort of illustration of what the patent may look like in real life so don’t get all worked up.