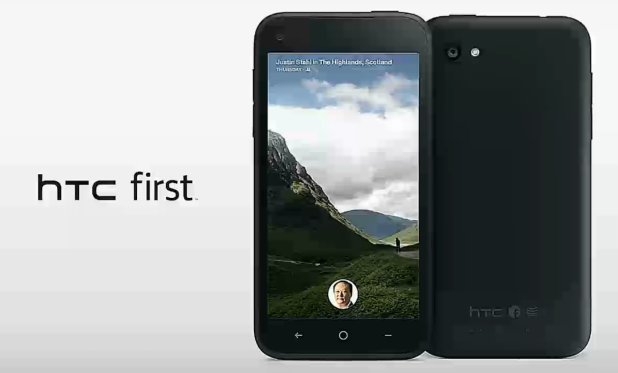 Facebook’s media event just ended and as expected, most of what was talked about had to do with a new Facebook experience on Android. The social network unveiled a new ‘people first’ launcher, or shell if you will, for Android devices called Facebook Home.

But software wasn’t the only topic of discussion today. Right before ending the press conference, Mark Zuckerberg pulled a Steve Jobs’-like ‘one more thing,’ and called HTC’s CEO Peter Chou on stage to introduce the long-rumored HTC First smartphone…

It’s tough to call the First the actual ‘Facebook’ phone, because it’s not really. It’s just an Android phone that runs Facebook’s new Home launcher, as it sounds like many others will. Facebook will be rolling out Home to select Android devices next week.

But the thing that makes the First different is the fact that it will run Home right out of the box. That means you can experience all of the glorious UI tweaks, Facebook integration and other features Home has to offer without having to install or do anything.

For a visual, here’s a video of it in action:

The First will come in an array of colors, and land on AT&T on April 12th (it sounds like an AT&T exclusive as of now). And for folks who can’t wait to get their hands on it, it’s available for pre-order today for just $99, with a two year AT&T contract of course.

If the First isn’t really your style, it’s worth noting that Facebook has opened up a full-blown ‘Home’ program to other handset manufacturers. So it’s likely that we’ll see a Sony or LG Home handset at some point in the future.

Well, what do you think of the so-called Facebook phone?