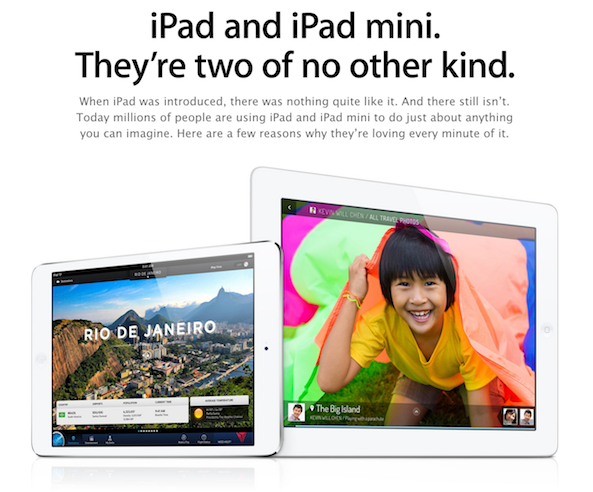 Hot on the heels of its recently launched ‘Why iPhone’ web campaign, Apple has rolled out a similar advertising theme for its iPad. And as before, it showcases a number of reasons why the tablet has been so popular.

The new ‘Why iPad’ page highlights everything from awards, to features, and of course the iTunes ecosystem. Unlike tablets on other platforms, there are 300,000+ iPad-specific apps available in the App Store…

Here’s an excerpt from the page:

“When iPad was introduced, there was nothing quite like it. And there still isn’t. Today millions of people are using iPad and iPad mini to do just about anything you can imagine. Here are a few reasons why they’re loving every minute of it.”

And it goes on to mention the iPad’s positive J.D. Power rankings, the percentages of companies and schools using the tablet, the quality of the materials used in building it, its Retina display and its 10-hour battery life.

But Apple doesn’t just stop at touting iPad features, it also goes after the competition. In the section entitled ‘Millions of ways to play, work, and learn. From one trusted source,’ it takes a few shots at the Android platform.

“The iTunes Store is the world’s largest and most trusted entertainment store. And the App Store is home to over 300,000 iPad apps — all reviewed by Apple to guard against malware. Other mobile platforms have a myriad of fragmented store options, resulting in availability issues, developer frustration, and security risks.”

As we’ve said before, attacks like these are very out of character for Apple, who usually just lets its products do the talking. Or I guess I should say were out of character, because lately it seems like this is the norm for them.

Earlier this month, its SVP of Marketing Phil Schiller tweeted out a link to a mobile malware support that slammed Android. And he followed that up with a few Android bashing interviews on the eve of Samsung’s Galaxy event.

Overall though, I think Apple accomplishes its goal with the ‘Why iPad’ page. It provides several great reasons for why you should  go with the tablet, and even a few subtle reasons why you shouldn’t pick the others.