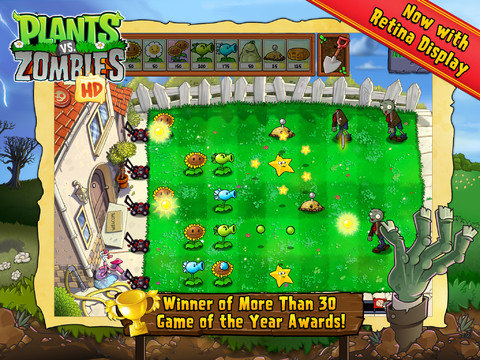 Plants vs. Zombies, a tower defense game originally published by PopCap Games for Microsoft Windows and Mac OS X, hit Apple’s iOS platform in February 2010. The title has some ardent following and though I’ve never been a huge fan, it’s true that the iPhone and iPad versions helped the game take off in a big way. PopCap announced today that a sequel, unimaginatively titled Plants vs. Zombies 2, will be launching early this summer…

Unfortunately, not much was known at press time by way of detail.

PopCap slipped the release date in a media release announcing the launch of a limited beta of Plants vs. Zombies Adventures, a social version of the original game created for the Facebook platform.

“PopCap also confirmed today that Plants vs. Zombies 2, the sequel to the original blockbuster game, is slated to launch in early summer,” the press release reads.

As for Plants vs. Zombies Adventures, the game offers exclusive leaderboards, new plants and zombies along with new ways of obtaining, cultivating and deploying plant defenses.

PopCap Games is now an Electronic Arts property so Plants vs. Zombies 2 is likely to be available across as many platforms as possible, quite possibly on a free to play basis.

PopCap games have been downloaded an astounding 1.5 billion times. I’m a big fan of their highly addictive Bejeweled puzzle game which sold 50 million copies across all platforms.