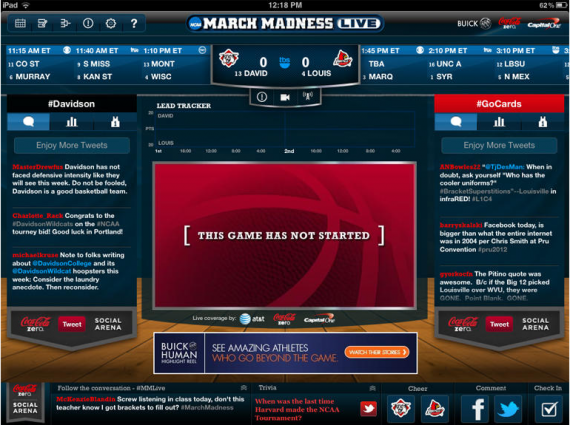 Great news college basketball fans. NCAA’s March Madness Live app for iOS has been updated today for 2013. March Madness is a two week-long affair, with 68 teams playing in a single elimination tournament to find a champion.

Overall, a total of 67 games will be played over the course of the event. And with NCAA March Madness Live, you’ll be able to watch all of them on your iPhone or iPad. You’ll also be able to check scores, watch highlights, and more…

“Watch every game with NCAA® March Madness® LIVE on your iPhone, iPod Touch, iPad and iPad Mini! Download to follow the tournament bracket, check schedule and scores, fill out your bracket, set game alerts, listen to live game radio, and track social activity around all the games.”

– Fully redesigned for the 2013 NCAA® Division I Men’s Basketball Tournament
– Fully redesigned Capital One NCAA® March Madness® Bracket Challenge
– Portrait and landscape support for most features, including watching live games, scores, stats, social content, and the tournament bracket (iPad only)
– Track Key Moments in real-time from every game, including the key video highlights, photos, and tweets based on social volume (iPad only)

Now because this involves TV programming, you’ll have to sign in with your TV provider credentials to be able to watch most of the games. If you don’t, you’ll still get those broadcast on CBS, but you’ll miss those on TBS, TNT and truTV.

I’ used this app during last year’s tournament, and I have to say it’s hands down the best major event app there is. Video is crisp (depending on your connection), the UI is sharp, and it allows you to enter and keep track of your bracket.

March Madness kicks off next Tuesday, March 19, and it will run through April 8. If you’re interested in grabbing the app, you can find it in the App Store for free. Oh and bonus, it lets you watch 4 hours of games before you have to sign-in.