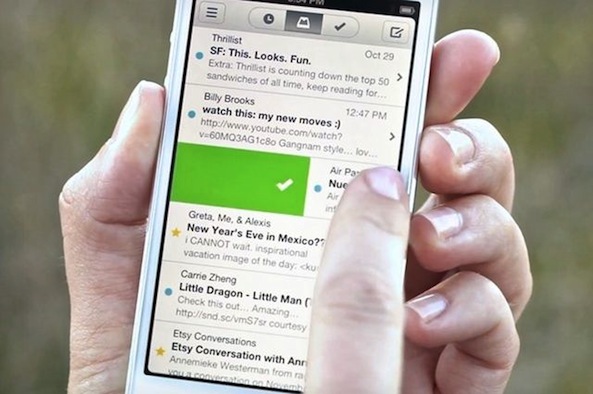 That didn’t take long. It’s only been a few months since we first heard about Mailbox, the fresh new iPhone email client. And it’s only been about about a month since it actually launched. But it looks like they’re going to be bought out.

Dropbox has announced this morning that it will be acquiring the Mailbox team. There’s no word on price yet, but it looks like all 13 team members will be joining Dropbox, and Mailbox will continue to operate as a standalone app…

“We felt we could help Mailbox reach a much different audience much faster,” said Dropbox CEO Drew Houston, who said both companies shared the goal of making people’s lives easier.

Mailbox has generated a lot of buzz since it launched last month. The app has been rolling out in phases, using a unique reservation system to control server traffic. Our very own Jeff reviewed the client, calling it “an email app that thinks different.”

Speaking with The Journal today, Orchestra CEO Gentry Underwood said Mailbox is now delivering 60 million messages a day, and has taken 1.3 million reservations. And he adds that they are still struggling to keep up with the demand from users.

Dropbox, for its part, isn’t doing too shabby either. The company currently has around 250 employees, and has been valued by investors at $4 billion. Rumor has it, it’s even discussed an initial public offering with bankers, but there are no imminent plans.

The Mailbox purchase is an interesting move, to be sure. And we imagine that this is good news for both companies and their respective apps.

What are your thoughts on all of this?