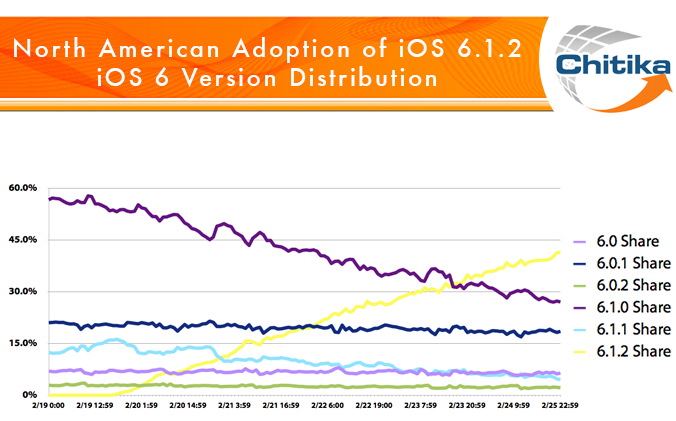 Nearly 35 percent of iDevice owners have adopted Apple’s iOS 6.1.2 software in less than a week following its February 19 release, an ad network announced Tuesday. That iOS 6.1.2 became the most popular iOS version in such a short time is largely attributed to a glitch with Exchange calendars that resulted in increased network activity and reduced battery life for some iOS 6.1 users. While in line with previous iOS 6.x adoption rates, this particular data point evidently indicates folks continue to obsess over their mobile gadgets’ battery performance…

According to the data by Chitika, the swift uptake of the update was “understandable” given the Exchange bug could drain a device battery.

“This makes 6.1.2 the most popular version of iOS domestically, surpassing iOS 6.1.0, and adoption of the OS shows no signs of slowing down,” the ad firm wrote.

The first update focused on a problem some iPhone 4S users were having with performance of 3G connections. As we reported, the firmware update achieved a 22 percent adoption just two days after its release.

By four days, the software had been installed on 26 percent of iDevices.

For comparison, 48 hours following its release, iOS 6.1.2 adoption nearly equaled what we observed for the much more highly anticipated iOS 6 within the same period – a significant achievement considering this update was centered on an OS bug fix.

The adoption rate has become somewhat of a benchmark between Apple and Android. 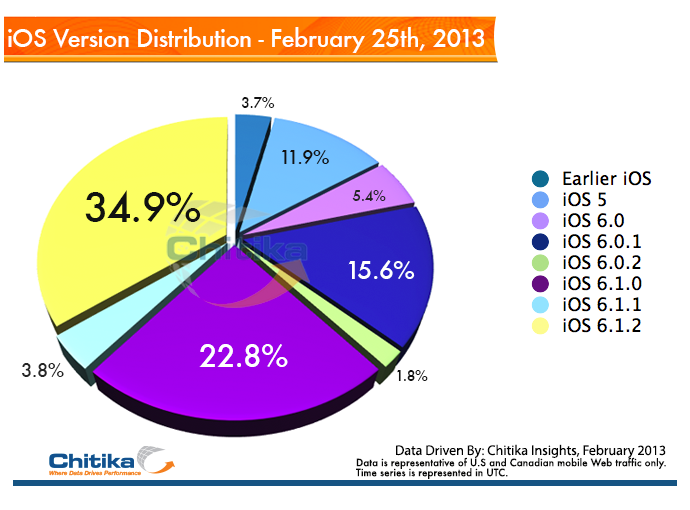 Reports show Apple fans are more eager to update their devices to the latest software.