U.S. carrier AT&T announced an expansion of its fourth-generation Long-Term Evolution (LTE) radio technology in Tunica, Mississippi; Athens and McMinn County; and LaFollette and Campbell County. The company has also flipped the switch on 4G in Tallahassee, Florida; Lawrence, Kansas; and the Salinas and Monterey areas. AT&T says its 4G network covers more than 285 million people and includes 3,000 more 4G cities and towns than Verizon. Letting us in on the latest on its network expansion, the telco underscored its Wi-Fi network doubled in 2012 versus the year-ago period…

AT&T also announced a multi-year partnership with OnStar, a subsidiary of General Motors, to wirelessly deliver safety, security, diagnostic and infotainment services to most Chevrolet, Buick, GMC and Cadillac vehicles, beginning in 2014 in the United States and Canada.

Over the past five years, the Dallas, Texas wireless carrier has invested nearly $98 billion into operations. In fact, AT&T since 2008 has invested more capital into the U.S. economy than any other public company.

Its 4G LTE network promises to deliver speeds up to ten times faster than 3G.

Our network’s radio components are placed close to the antenna at most cell sites, instead of inside the base station, which helps minimize power loss between the base station and antenna and, in turn, improves the performance of our 4G LTE network.

The network also is designed with its core elements distributed across the country, which helps reduce latency, or the delay when using the Internet, because your request isn’t traveling as far.

They also operate probably the nation’s largest Wi-Fi network with more than 32,000 Wi-Fi hot spots at public places and more than 402,000 hotspots globally through roaming agreements. By providing access to these hot spots free of charge, the firm is hoping to relieve the strain from its owercrowded 3G network.

You can check the AT&T Wi-Fi coverage in your area here.

According to a blog post, with 2.7 billion connections made in 2012, AT&T’s Wi-Fi network growth doubled that of the year-ago period. The company’s Wi-Fi footprint grew ten percent last year and connections to venues grew by nearly 200 percent in the past year.

Here, there’s an infographic for that. 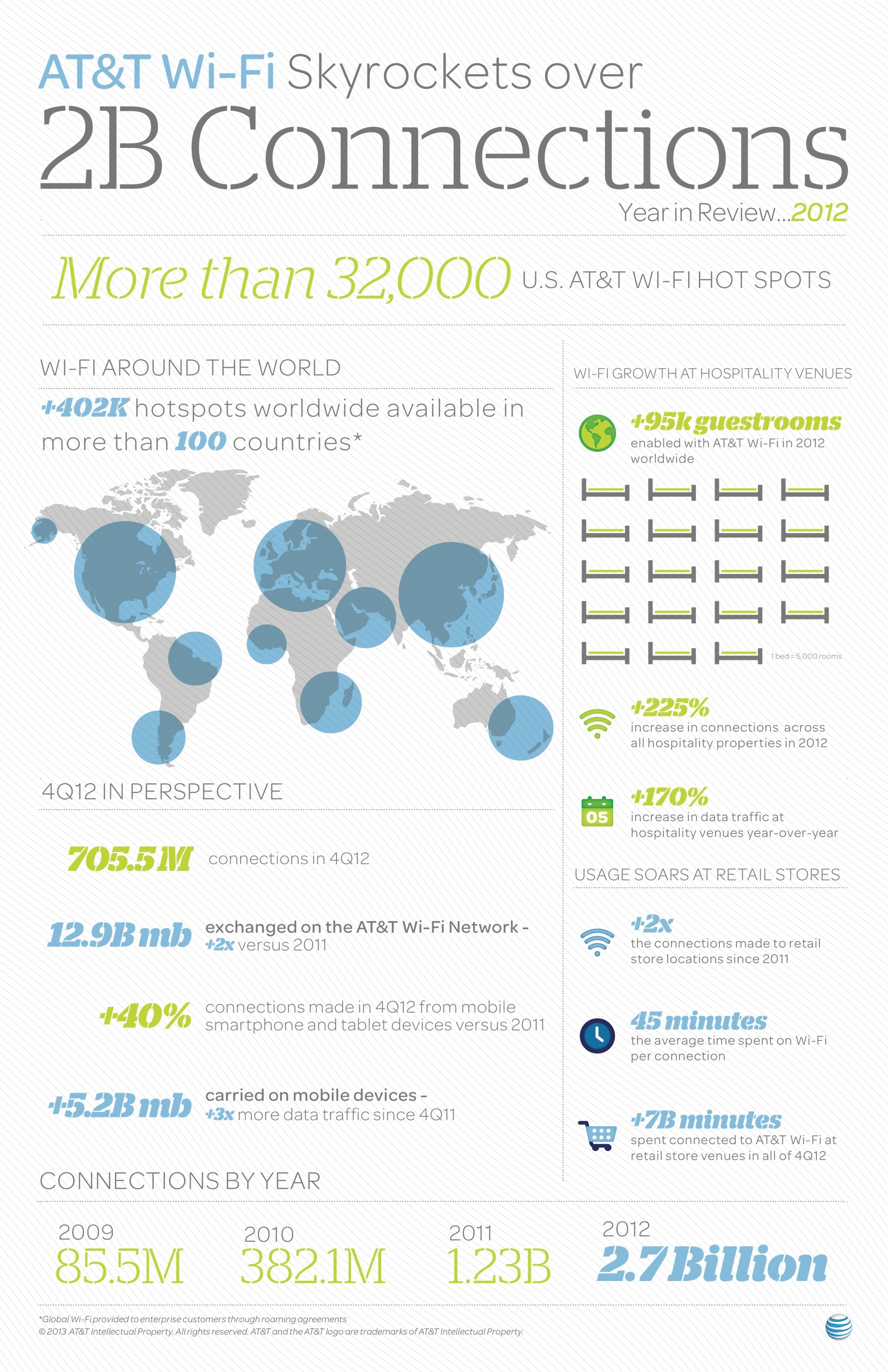 The carrier saw three times more mobile device traffic exchanged on the Wi-Fi network soaring over 5.2 billion MB in 2012. In the holiday quarter, 40 percent more connections were made from mobile devices versus Q4 201. They also saw a 190 percent increase in mobile data uploads on the AT&T Wi-Fi network quarter-over-quarter.

AT&T, of course, was a key launch partner for the iPhone in the United States, securing an exclusive multi-year agreement without interfering with the Apple user experience.

Chatters suggest that AT&T is considering a merger with one of Europe’s major wireless companies. By bringing its 4G expertise to the table, the company could help with LTE roll-out in Europe as it faces the constraints on growth at home.