If you live outside the United States, you could be wondering why all the fuss about Super Bowl. But to many of our U.S. readers, Super Bowl is America’s favorite national pastime. Regardless of the camp you belong to, pretty much all of us love big-budget Super Bowl commercials, that much is a given. And speaking of advertising, Samsung ahead of Sunday’s Big Game has “leaked” its anticipated commercial.

Conceptualized by the Los Angeles-based creative shop 72andSunny and directed by Jon Favreau, it features Knocked Up stars Seth Rogen and Paul Rudd who are called in to pitch their concepts for Samsung’s Next Big Thing.

But despite their best effort to bat around crazy ideas with Bob Odenkirk (example: “crowdsourcing… we won’t have to think of ideas!”), Miami Heat star LeBron James makes a tablet cameo and lands the gig instead. Though it takes jabs at both the NFL and ad industry and mocks Psy and his Gangnam Style, interestingly enough the commercial isn’t about Apple at all, sans a subtle reference that almost escaped my attention…

The irritated Paul at one point asks Seth:

Are you sure that maybe you’re not here to see a guy named Sam Sung?

What’s the Apple connection, you ask.

Well, turns out there is a guy named Sam Sung and he’s an Apple specialist!

I ain’t kidding, Sam Sung made rounds on the blogosphere last November.

Here’s his business card, courtesy of The Loop. 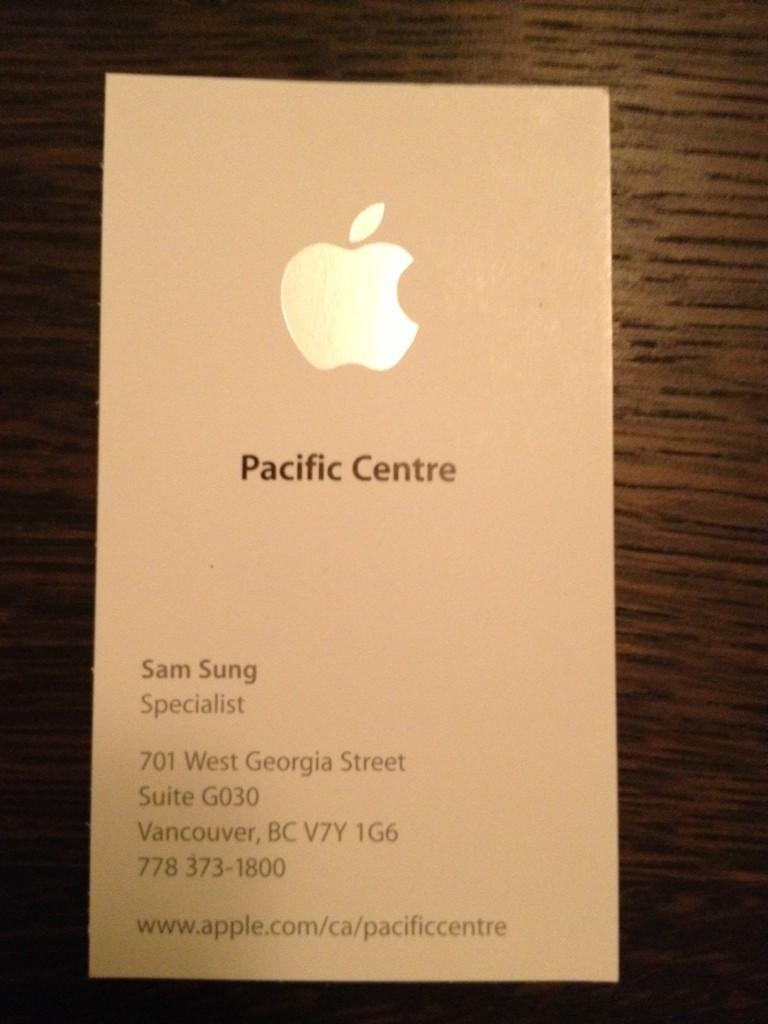 The obvious question: does he have co-workers named Ann Droid and Mike Rosoft?

And right below is Samsung’s 60-second Super Bowl teaser titled “El Plato Supreme”. It, too, has the two comedians running into hurdles while brainstorming the ad.

They spoof the NFL and poke fun of the advertising industry’s rules which prohibit use of trademarked words, like “Super Bowl”, “Baltimore Ravens”, “49ers” and so forth.

The witty banter where they consider alternatives like “San Francisco 50 minus ones” is gold.

That clip even manages to make a funny reference to Samsung’s legal woes with Apple.

Asked who might sue Samsung over the trademarked words, the deadpan Bob quips:

Everybody. Nobody. Who knows?

Their love for hashtags is also funny.

You can check out best of the best in this year’s Super Bowl advertising on the NFL’s official Super Bowl 2013 Epic Ads channel on YouTube.

Say what you will, but Samsung’s Super Bowl commercial manages to be both entertaining and memorable – and that’s saying a lot.

Who do you think will take the Big Game: the SF 50-Minus-1-ers or the Baltimore Black Birds? #TheNextBigThing twitter.com/SamsungMobileU…

At the very least, it’s unmistakably a far cry from Samsung’s anti-Apple advertising which culminated with a 90-second 2012 Super Bowl Galaxy Note commercial directed by Bobby Farrelly and featuring The Darkness.

Called “Thing Called Love”, it predictably ridiculed people who’d stay in the line for an iPhone.

In case you were wondering, the Galaxy maker paid $15 million to secure a two-minute Super Bowl ad slot which guarantees more than a hundred million eyeballs nationwide.

That shouldn’t be too much of a problem for the South Korean conglomerate: its marketing expenses eclipse ad budgets of its rivals, including Apple’s.

Like in years past, Apple passed on Super Bowl XLVII.

What say you: has Samsung scored a game-winning touchdown with its Super Bowl ad?

Maybe you can spot additional digs at Apple that slipped under my radar?