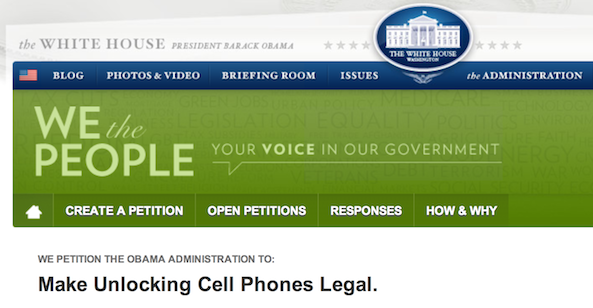 By now, you’ve likely heard of the recent change in DMCA policy that makes the act of unlocking newer cell phones illegal. And even though the EFF clarified some things for us earlier today, it still sounds like we’re getting screwed.

In fact, some folks feel so strongly about the new law that they’ve started a White House petition calling for the Obama administration to either rescind the decision, or create a new bill making unlocking permanently legal…

The petition calls The Librarian of Congress’s decision to remove unlocking cell phones from the DMCA exception list unfair, noting that it decreases the resale value of devices that consumers have, one way or another, paid for in full.

“Consumers will be forced to pay exorbitant roaming fees to make calls while traveling abroad. It reduces consumer choice, and decreases the resale value of devices that consumers have paid for in full.

The Librarian noted that carriers are offering more unlocked phones at present, but the great majority of phones sold are still locked.

We ask that the White House ask the Librarian of Congress to rescind this decision, and failing that, champion a bill that makes unlocking permanently legal.”

While petitions like this rarely institute significant changes in policy, they do help call attention to their issues. For example, if the petition garners 100,000 signatures or more before its deadline, the White House has to give a response.

At the time of this writing, this petition to make unlocking legal has collected 36,748 signatures. That means that it has to grab another 63,252 of them by February 23, 2013 if it wants to get a response. Click here to add your name.

Have you signed yet?