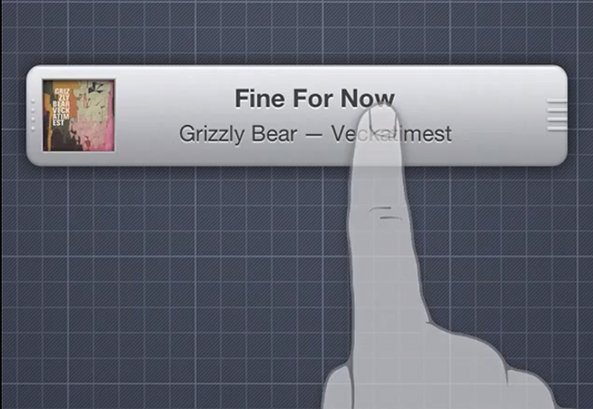 Do you love iTunes 11‘s MiniPlayer so much you wish you could just take it with you when you leave the house? If so, Sentry’s latest concept for an iOS MiniPlayer will be a dream come true.

Sentry’s iOS MiniPlayer concept is a bar-shaped widget which displays the name of the song currently playing, along with the album art and subtitles for the album and band. Tap on the title, and you’ve got basic playback controls for pause, fast forward, and rewind. There are even bars at the side of the MiniPlayer which you can drag to hide or reposition the widget…

If you like the iOS MiniPlayer concept so far, you’ll be happy to hear this isn’t just an idea Sentry is toying around with. According to his description in the YouTube video, Sentry is working with @Sirifl0w and @SmartviperE75 for the iPad and iPhone versions of the upcoming tweak.

Functionally, it doesn’t look too different from the ‘Music Widget’ I’m currently using with Dashboard X on my iPad. These are music controls implemented in a very Apple-like fashion, albeit with more bells and whistles. That said, if we’re trying to replicate the full desktop experience on the iPad then I’d love to see if the MiniPlayer cooperates with the Quasar window manager.

It’s worth mentioning that Auxo, another concept-turned-tweak from Sentry, contains a built-in music player with much of the same features that the MiniPlayer has. Auxo is available in Cydia for $1.99 and Jeff has put together a great video review for that tweak.

Do you need another music player interface on your iPhone, iPad, or iPod Touch? Let us know what you think in the comments section.

Update: Sentry clarified that it was Siriflow and Smartviper who came up with the concept for the tweak. The developers approached Sentry to help with the UI/UX design.