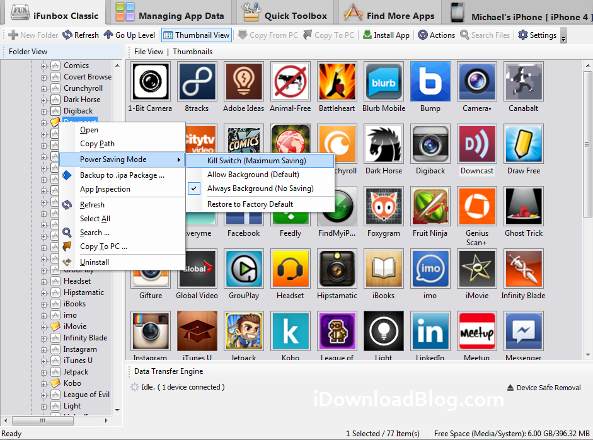 Want to take a load off your iOS device’s CPU, battery life, and cellular bandwidth by preventing certain apps from running in the background? Sure, you could install a tweak like WeeCloseApps, but it doesn’t set automatic profiles for app behavior, and it doesn’t work on non-jailbroken devices.

Luckily, there’s a powerful iOS file browser for Mac and PC called iFunBox, which works on both jailbroken and non-jailbroken devices. Among its features, iFunBox allows users to edit ‘Power Saving Mode’ profiles. Right click on an installed app and you can set one of three multitasking states: allow background, always background, and kill switch. ‘Allow background’ is the default state of most apps, while ‘always background’ is normally applied to music and podcasting apps that you’d want active in the background, and ‘kill switch’ is applied to power-hungry games…

So what happens when you mess with these settings?

When you set an app to ‘kill switch’ mode, it will still show up in the switcher bar that you normally think of as a ‘task manager’, but if you check the active process in SBSettings, you’ll see it isn’t on the list, as it isn’t actively running. 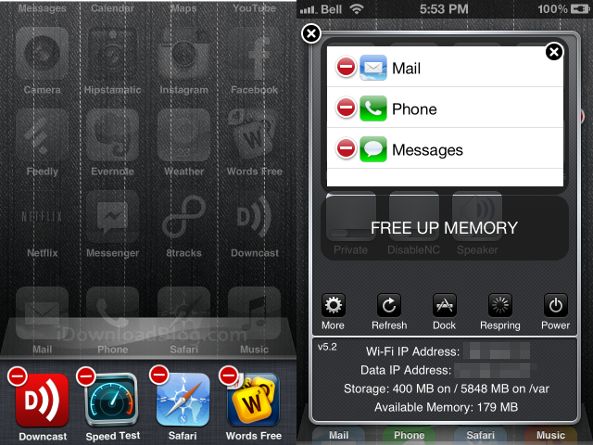 For example: in its default ‘allow background’ state, Downcast will continue streaming through my podcast playlist in the background if I press the home button and do something else. With ‘kill switch’ enabled, just press the home button and the audio stops; Downcast’s process is no longer running in the background. What’s impressive is the app still plays audio while the phone is locked. The app only closes if you switch to something else.

Want to do the opposite and discourage an app from closing while multitasking? Just set it to ‘always background.’ You’ll still be able to kill the app from the Switcher, but they won’t automatically exit when you press the home button. While the Speedtest.net app normally closes in the background, with ‘always background’ enabled I was able to multitask while running a benchmark.

iFunBox is available to download for free from our download sections. Be sure to let us know what you use the program’s ‘power saving mode’ profiles for.

Edit: As corrected in the comments, tweaking the power saving mode only works on jailbroken devices.