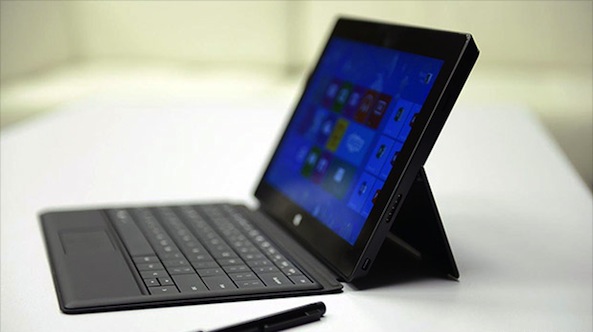 After a bit of a delay, Microsoft today announced launch details for its new Surface Pro tablet. The device will become available for purchase on February 9, and will run $899 for the entry-level 64GB model.

The Pro’s release comes more than three months after its less-capable sibling, the Surface RT. And with reports suggesting that it didn’t do so well over the holidays, Microsoft is hoping the Pro will be a hit…

“Microsoft Corp. today announced that its Surface family of PCs is growing. Its newest model — Surface Windows 8 Pro — will be available for purchase on Feb. 9, 2013, in the United States and Canada at all Microsoft retail stores, microsoftstore.com, Staples and Best Buy in the U.S., as well as from a number of locations in Canada.”

Essentially, Microsoft is pitching the Surface Pro as a laptop/tablet replacement. It has a Core i5 processor, 4 gigabytes of RAM and a 1920×1080 full HD display. It also runs Microsoft’s full Windows 8 software.

But the Pro also comes with a few caveats (or trade-offs). For starters, it’s expensive—even for a touchscreen laptop. It’s also thicker and heavier than most tablets. And at just 5 hours, it has far worse battery life.

It’ll be interesting to see how Microsoft fairs with the new Surface. Folks have long been calling for Apple to make a Macbook Air-iPad hybrid. But Tim Cook rebuffed the idea, likening it to a refrigerator-toaster.

So, who’s planning on getting a Surface Pro?