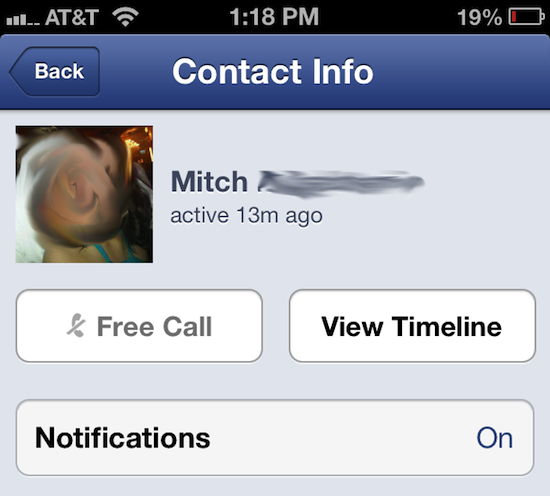 Earlier this month, we told you that Facebook had added a free VoIP calling feature to its Messenger app in Canada. It was clearly a test, to ensure that the social network’s servers could handle the added bandwidth. And apparently the tests went well.

Today, many users, including us, have noticed that Facebook has quietly started rolling out the VoIP feature to the US version of its Messenger app. It comes by way of a new ‘Free Call’ button, which will allow you to telephone your FB contacts for free…

The Verge was first to spot the change, and says that Facebook has confirmed with them that it has begun its US rollout of its new Free Calling service. The feature, it says, will install automatically, so there’s no need to download an update through the App Store.

To see if it’s been activated for you, simply launch your Messaging app, open up a conversation with one of your contacts, tap the “i” button in the top right-hand corner, and see if the Free Call button is there. If it’s there, tapping it will initiate a free VoIP call.

The Messenger app is currently only available for the iPhone and iPod touch, despite the fact that many believed Facebook would unveil an iPad version at yesterday’s press conference. It also doesn’t include video chat yet — another widely speculated project.

If you don’t have Facebook Messenger yet, you can find it in the App Store, for free.

Have you tried Messenger’s new VoIP feature? What do you think?