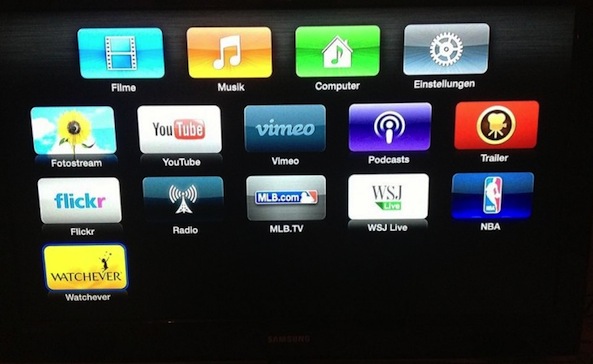 Apple TV owners in Germany are in for a little surprise the next time they boot up their set top boxes. It appears that Apple has added a new app to the home screen for Watchever, a new video subscription service.

Similar to Netflix, Watchever gives users unlimited access to local, European and international movies and TV shows for €8.99 a month (or about $12 USD). And now, German users can access it on their ATVs…

The Next Web‘s Matthew Panzarino has more on the new app:

“This marks the first time that Apple has added an international-specific service. and the first time that the service is available in only one region. It does not appear to be available on Apple TVs outside of Germany. This could be the start of a trend in which Apple cuts deals for regions where there is a strong localized offering that delivers content appealing to Apple TV owners there.”

The Watchever app includes the ability to choose between a German voice-over version of international movies, or the original. And it also has a personal recommendation feature, similar to the one found on Netflix.

So if you live in Germany, and have an Apple TV, you can find the new Watchever app on your home screen. If not, try a quick reboot. And for what it’s worth, the service is currently offering risk-free 30-day trials.

As you may recall, Apple launched Hulu Plus on the Apple TV back in July of last year in a similar fashion, with a one week free trial for new subscribers.