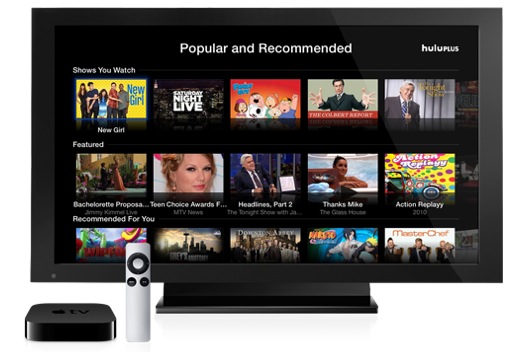 Hulu announced today that folks can now use its paid service to stream thousands of television shows and movies to their television through the Apple TV set-top box. The app’s been in the works since last year (though a tweak for jailbroken Apple TVs lets you access your Hulu Plus without too much fuss). It’s now finally ready for public consumption, right from your main menu…

Just hit the new Hulu Plus icon on the Apple TV home screen and enter your Hulu Plus credentials to start streaming shows instantly. A one-week free trial is also available, but only to new subscribers.

The company wrote in a blog post that you can also create an account directly through the Apple TV:

If you sign up for Hulu Plus through Apple TV, you will be emailed instructions on how to complete your registration so you can use Hulu Plus on all other supported devices.

After your free 1-week trial ends, your iTunes Account will be charged $7.99 per month as a recurring transaction.

It’s interesting that you can pay for your subscription using your iTunes credit card on file, meaning Hulu has finally agreed to Apple’s revenue sharing scheme, which is kinda big if you ask me.

Another biggie, as noted by The Next Web: people with a U.S. iTunes Store account can access Hulu Plus on their Apple TVs outside the United States as Hulu may not be able to figure out your geographical location because it doesn’t have access to Apple’s iTunes servers, which isn’t to say that the company won’t find a way to prevent this.

Hulu Plus is only eight bucks a month and you can cancel your subscription anytime. All shows are offered with what Hulu calls “limited advertising”.

Hulu Plus offers every episode of the current season and subscribers also have access to back seasons and full runs of TV shows, including many that were not available online before, in high-definition “whenever possible”.

To our international readers: Hulu is still a U.S. and Japan-only play.

Do you plan on watching Hulu Plus shows via your Apple TV?